How the Arizona Commerce Authority Got Its Start 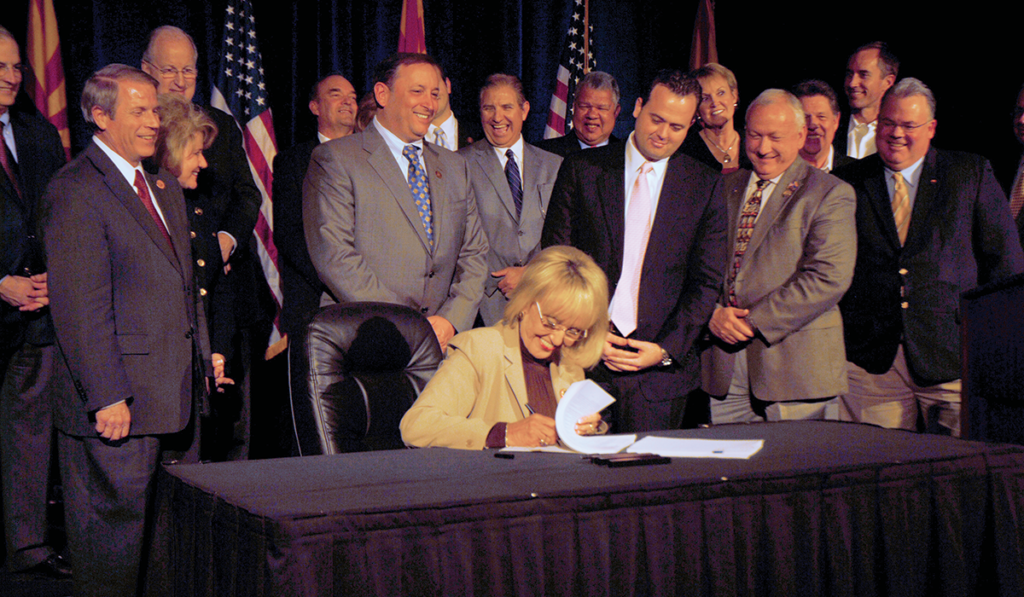 Arizonans are no strangers to hard times, and few times tested the state and its leaders like the Great Recession.

In the years leading up to the 2008 financial collapse, Arizona’s economy blossomed, at least on the surface. A flood of new home and construction projects boosted job and revenue numbers to new heights. But these peaks would prove unsustainable.

The boom in Arizona’s “growth” industries distracted from deeper flaws in the state’s economic makeup, namely, a lack of industry diversification and higher-end jobs. This would prove costly. Due to an over reliance on just a few sectors, when the global financial meltdown hit, it hit Arizona households particularly hard.

In 2009, Arizona residents experienced more than 160,000 foreclosures, the third highest in the nation, as reported in an article in The Atlantic (“Which States Had the Most Foreclosures in 2009”; Jan. 14, 2010). Over the next few years, the stalled economy would see the loss of more than 300,000 jobs and $3 billion in state revenue.

“Every week, the job projections were worse, the job losses were mounting. And we were in the middle of just a true firestorm,” said Kirk Adams, who served as Speaker of the Arizona House of Representatives from 2008 to 2011.

As state and local leaders acted to stem the fallout, some around the state gave thought to addressing the fundamental deficiencies in Arizona’s economic approach.

“We had an economy that was too reliant on real estate, too reliant on growth, too reliant on back-of-house jobs that were eliminated,” said Michael Bidwill, owner of the Arizona Cardinals. “What we really needed to do was pivot and have a strategy.”

At the urging of Governor Jan Brewer, individuals from government, business, universities and more convened to develop a long-term strategy that would enable Arizona to lead and prepare against future downtowns, not just react to them.

The effort was spearheaded by a group of business and government leaders — appointed by Governor Brewer — who would make up the Governor’s Commerce Advisory Council (the Council). Governor Brewer tapped JDM Partner and international sports executive Jerry Colangelo to lead the Council.

“We started looking at what existed, first of all, and when we did that, the conclusion was we need to basically start over again,” he said. “I’ll use the expression ‘blow it up.’”

The Council got to work, studying best practices around the country and world, speaking with Arizona thought leaders from around the state, and reviewing the current economic model then represented by the Arizona Department of Commerce. The group also brought on the work of Sara Dial, herself a former Arizona Commerce director.

Over a period of four months, the Council along with Dial engaged more than 320 Arizona leaders through focus groups and stakeholder meetings. These individuals represented 180 public and private sector organizations from rural and urban areas throughout the state.

Through this process, the Council and Dial developed a blueprint for a new economic agency that is unique to Arizona.

“Governor Brewer and others at the time took a very thoughtful and deliberate approach,” said Roy Vallee, former chairman and CEO of Avnet and a member of the eight-member council. “And through this iterative process, we came up with a recommendation to the governor, which was to create what is now the Arizona Commerce Authority.”

The new Arizona Commerce Authority would be designed to excel where the previous department fell short. Instead of being weighed down by unwieldy mandates, the new agency would be equipped with the flexibility and resources to respond quickly to job creation opportunities. Instead of a focus diluted with unrelated responsibilities, the agency would be infused with a clear, forward-thinking mission to improve the state for business and innovation. And it would be overseen by the best minds in the private sector.

“One of the most powerful words in business is ‘focus,’” Vallee added. “So, we took talented people, the resources, and put that into an organization that was solely dedicated to economic development.”

Governor Brewer signed the Arizona Commerce Authority (ACA) into law on February 17th, 2011. She appointed Don Cardon, a businessman with a long record serving in both the public and private sectors, as the agency’s first president and CEO.

In addition, the legislation enacted a suite of economic and financial tools, known as the Arizona Competitiveness Package, that included targeted business incentives to be overseen by the ACA and broad tax reforms that would enable the state to compete nationally.

“Arizonans and Arizona policymakers wanted a level playing field. So, we created an incentives structure that is just that,” said Adams. “There’s no backroom dealings. There are no special favors for special people. It is transparent and performance-based.”

Armed with both public- and private-sector leadership and a clear mission focused on the quality as well as quantity of new jobs, the ACA set out to fundamentally change Arizona’s economic landscape.