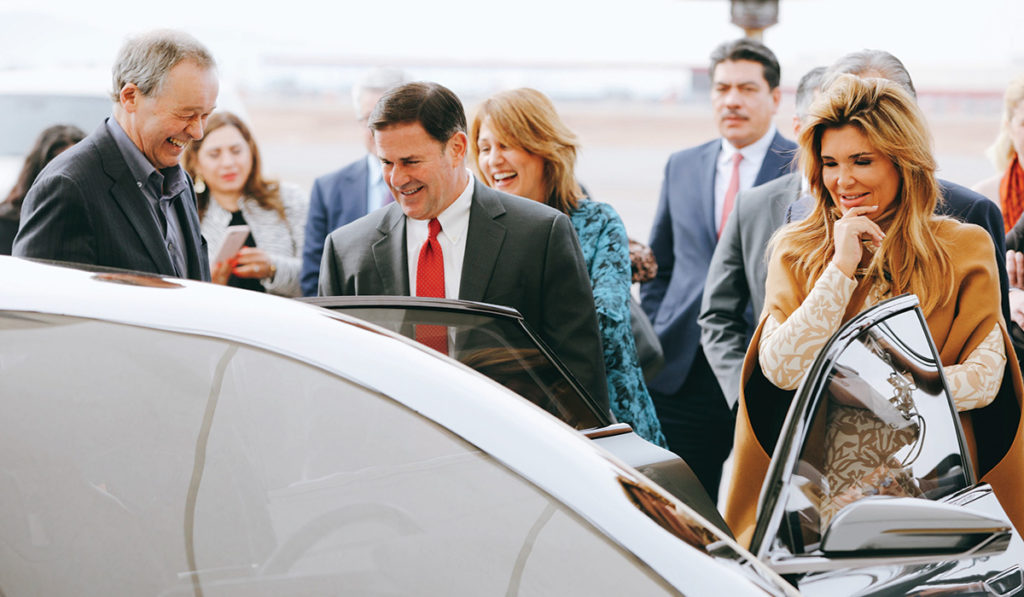 The passage of the Arizona Competitiveness Package in 2011 represented a groundbreaking shift in how Arizona pursues economic development and was the culmination of countless hours of collaboration among the legislature, Governor’s office and private sector.

Of course, it was also just the beginning.

“The work of creating a new Arizona Commerce Authority didn’t end with the passage of the legislation,” said Eileen Klein, former state treasurer and president emeritus of the Arizona Board of Regents. “From there, there was an effort by business leaders to make sure that we put together a very strong business plan.”

“It was critical that we build on Arizona’s strengths to enhance business opportunities and better position us to successfully compete in the global economy,” said Sandra Watson, who began as executive vice president and chief operating officer at the ACA and was appointed president and CEO in 2012.

“Our focus was on export-based industries — aerospace and defense, renewable energy, semiconductor and electronics and the bioscience industry — as well as advanced business and financial services and headquarters operations.”

Early on, the agency also took new steps to prioritize rural economic growth and support local entrepreneurs through programs such as the Arizona Innovation Challenge, the Venture Ready Accelerator and Venture Madness — all of which provide resources and mentorship to help early-stage ventures commercialize new technologies and scale.

Success would come quickly, and, by 2015, new leadership at the state capitol catapulted the state’s economic development efforts into overdrive.

“As the organization grew up, particularly since 2015 when Governor Ducey took over, having a businessperson chair that organization has really been a game-changer for us,” said Michael Bidwill, owner of the Arizona Cardinals and a founding ACA board member.

A former businessman and CEO, Ducey brought his executive-minded approach to both state government and the ACA, where he chairs the board of directors.

“The number one change that I saw at the ACA is that I was going to be intimately involved,” he said. “I wanted to sit across the table with CEOs, decision makers and influencers and let them hear directly from the governor — the chief executive officer of the state — of what was going to happen in terms of our taxes being lowered, our regulations being reduced and that we would be a more business-friendly place.”

It did not take long for that approach to show results. Just weeks into the governor’s tenure, Arizona was grabbing international headlines. Apple, one of America’s largest and most iconic brands, committed in February 2015 to building a “global command center” in Mesa. At $2 billion, the investment represented one of Apple’s largest ever.

“Our ability through the ACA to land that facility here in Arizona sent a signal to the business community across the country,” said Kirk Adams, former Speaker of the Arizona House of Representatives and chief of staff to Governor Ducey. “You don’t just land Apple for no reason.”

Not to be outdone, Arizona startups have also made a big splash of their own with names such as CampusLogic, Paradox, GT Medical Technologies, Trainual and RevolutionParts drawing global attention. Each company is a previous winner of the Arizona Innovation Challenge, a startup business plan and pitch competition hosted by the ACA.

“What’s really been rewarding is watching our early-stage technology companies develop these new world-changing technologies and competing with companies out of Silicon Valley, New York City and Boston,” added Watson.

The ACA has improved Arizona’s economic environment in other ways, too. These efforts include enhancing the availability of skilled workers through workforce initiatives like the Arizona Advanced Technology Network, boosting broadband infrastructure in rural communities, optimizing export opportunities with trade offices in Mexico and Israel, and accelerating industry-university partnerships essential to research and development.

In total since 2011, the ACA has successfully won more than 975 competitive projects from companies that have committed to creating more than 191,500 projected new Arizona jobs and investing more than $55 billion in our state.

Even more noteworthy, Arizona’s old, boom-bust economy is a distant memory. In its place is a vibrant, expanding ecosystem rooted in innovation and technology — and one that’s turning heads around the world.

As former chairman and CEO of Avnet and founding ACA board member Roy Vallee stated:

“The team of Sandra Watson and Governor Ducey I think has taken the ACA to levels of achievement that many people thought were never possible.”