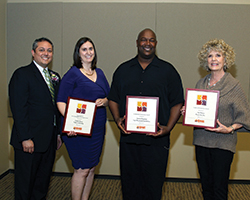 The Organization for Nonprofits Executives (ONE), serving nonprofit leaders in the Greater Phoenix area, recently announced the recipients of the 14th Annual Nonprofit “Director of the Year” Awards at its annual Nonprofit Leader Day event held on Tuesday, March 29, at the Desert Willow Conference Center. The awards, consisting of original custom artwork, were presented by ONE President Tom Egan of FSL and Bob Cox of event sponsor Nothing But NET, with the assistance of Mike Russell of KTAR as Master of Ceremonies.

Each year these awards seek to recognize nonprofit CEOs/executive directors who are outstanding examples of certain principles ONE values as representations of excellence in the management and leadership of nonprofit organizations in Maricopa County, Arizona.

This year’s Community Partnership Award recipient is Darren Chapman, founder and CEO of TigerMountain Foundation in Phoenix. The success of TigerMountain Foundation’s community gardens in helping at-risk teens and unemployed adults is a testament to Darren’s experience, leadership and credibility. He persuaded other nonprofits to join together to acquire and cultivate Spaces of Opportunity through the Cultivating South Phoenix coalition.

Christy Moore, president and CEO of Valley Leadership, is the recipient of this year’s Organizational Accomplishment and Innovation Award. Recognizing a need for additional leadership offerings, Christy added programs to fill gaps without duplicating offerings from other leadership development agencies. A confident consensus builder, Christy not only improved the impact of her organization by implementing these new programs and rebranding, but she also expanded her own strengths as well.

ONE’s Leader of Distinction Award is presented annually to a leader with 10 or more consecutive years of experience as chief professional officer of a Maricopa County nonprofit who has exhibited qualities of outstanding leadership for a sustained period of time. This year’s Leader of Distinction is Dee Mitten, executive director of Waste Not. Dee is the ultimate leader, unafraid to deal with all segments and people involved in the rescue and delivery of fresh food to those in need. Her pure, unbridled energy is contagious. She is committed to quality work, motivating those around her, both staff and volunteers, with grace and determination as she fearlessly overcomes challenges and forges new partnerships to further her organization’s impact on the community.

Additional sponsors include Wells Fargo Bank and Mutual of America.