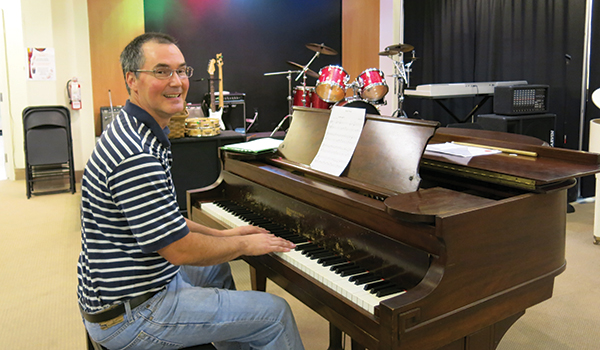 He built his career in programming, and he did it well; working as part of a global team, Jim contributed to the initial development and testing of next-generation cable modems. But what really made his heart sing was music.

After 26 years with Intel, the company offered him a unique early retirement opportunity. Through a partnership with the nonprofit Experience Matters, Intel would pay for Jim to work on a highly skilled project for one year as an Experience Matters Encore Fellow instead of going straight into traditional retirement. Jim jumped at the chance, and what followed next was a perfect match.

Phoenix Conservatory of Music (PCM) had talented musicians who needed recording space but lacked the budget and technology to make it a reality. As an Encore Fellow at PCM, Jim was able to combine his love for music and his skill with technology to bring their dream of their own recording studio to life.

He did what he does best: he improvised and innovated. With donated equipment, a lifetime’s worth of know-how and the help of an intern, Jim created three new recording units. Students can now make the recordings they need for college applications, and they can even record and sell their own music.

According to PCM Executive Director Regina Nixon, “Without Jim and his technical expertise and passion, coupled with the funding and resources that Experience Matters coordinates and supports, Phoenix Conservatory of Music would not have been able to get this project off the ground!”

When you visit PCM, be sure to check out the new studios. And while you’re there, keep an eye out for a brand-new student who is just a bit older than the others. That’s Jim, who now studies piano at PCM, fulfilling a lifelong dream of his own.