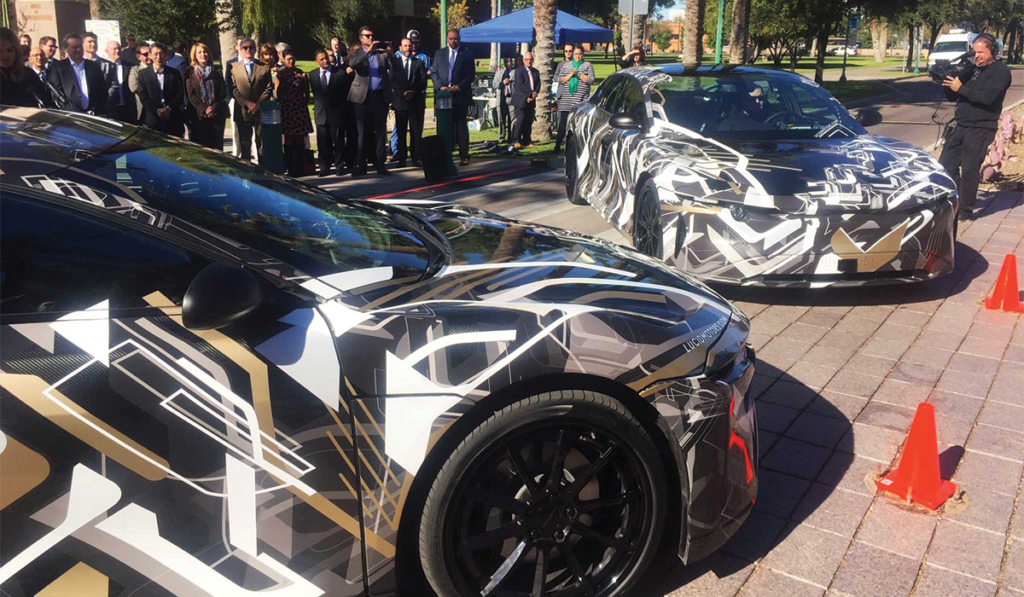 Examples of Lucid Motors vehicles were on display during Gov. Doug Ducey’s announcement that Casa Grande would be a manufacturing site for the company.

To the rest of the country if not the world, the U.S. border lately has meant only one thing: the Wall. But to those in the know, the borders — yes, it seems observers have forgotten there are two — have meant something else: opportunity.

A lot of this has been due to North American Free Trade Agreement (NAFTA), which 24 years ago created the world’s largest free trade zone with our nation and our neighboring countries to the north and south. Doing business with Mexico and Canada had been critical for Arizona as the two countries were the state’s top trading partners in 2016. Mexico was No. 1 with $8.3 billion in goods exported there last year, according to the U.S. Census Bureau. At the same time, Canada was the destination for $2.1 billion worth of products. And Arizona is just a piece of the entire pie. Canada is the main destination of exports for 35 U.S. states while Mexico is among the top three export destinations for 33.

For the technology sector, including members of the Arizona Technology Council, there is a lot at stake. In 2016, U.S. companies exported $43 billion in technology goods to Mexico and $24 billion to Canada, according to the Information Technology Industry Council. U.S tech exports to Mexico have surged nearly 70 percent since 2006.

Closer to home, the ties to Mexico have helped give birth to the Arizona-Sonora MegaRegion, signaling the attraction of high-tech manufacturing and cross-border initiatives. A prime example is the decision of Lucid Motors choosing Casa Grande as the site of a $700-million auto manufacturing plant to build the next generation vehicles that will compete with Tesla and other players in autonomous and electric driving technology market. Gov. Doug Ducey has touted the state’s strong relationship with Mexico and 98 automotive suppliers in the region to help seal the deal.

Mexico also offers a network of angel investors that is valuable to Arizona technology companies. In June, startup Urbix announced a $1.25-million investment from Mexican angel investors to support the Mesa-based company’s effort to produce a material used in additive manufacturing. Urbix uses a proprietary method to purify graphite without using hydrofluoric acid or a high-temperature treatment, which is a more efficient and environmentally friendly manufacturing method. This process allows the company to achieve battery-grade graphite after milling it down to a powder that can be used in a variety of ways, including disruptive technologies ranging from material for 3-D printing to making less costly thin film photovoltaic solar cells.

But a threat looms for relationships that have been built with Mexico and even Canada. Oct. 17 brought an end to the fourth and most recent round of talks on the renegotiation of NAFTA. The word is American negotiators are looking for changes that could help lower the U.S. trade deficit with the other two countries. However, there are risks that hit close to home for us all.

This was part of the reason that the Computing Technology Industry Association (CompTIA), the Technology Councils of North America (TECNA), and the Arizona Technology Council and other State Tech Council Alliance Partners sent letters in early October to U.S. Trade Representative Robert Lighthizer to tell him of our interest in the outcome of NAFTA, especially its modernization.

The groups let him know their top priorities are securing provisions that protect a free and open Internet, and protecting the movement of data across borders without forced localization. In particular, they advised, NAFTA 2.0 should prohibit requiring the transfer of private keys for commercial encryption products, software code and technology transfers as a condition of doing business. It also should block customs duties, taxes and other barriers to digital products and services.

In addition, the groups want NAFTA to eliminate tariffs on technology goods. While Canada and the U.S. have both broadly done so under the World Trade Organization’s Information Technology Agreement, the groups and their counterparts in Canada ask the United States to require Mexico to join the pact.

But the concerns go beyond the technology sector. One U.S. proposal concerns the rules of origin, which would dictate how much of the value of a car or truck must originate in the three NAFTA countries for the product to count as NAFTA-produced. The current requirement is 62.5 percent. The U.S. administration proposes raising the amount of NAFTA content in autos to 85 percent, with 50 percent of the total for the United States. According to The Detroit Free Press, auto industry observers say such demands could raise the price of vehicles and actually drive production offshore by causing carmakers to just pay a tariff and shift production to countries with lower labor costs.

The other hot-button topic from the U.S. is a “sunsetting” clause in NAFTA, which would require the agreement to end after five years unless all parties renew it. That could make U.S. companies wary of investing in operations involving Mexico or Canada if all bets might be off in five years.

Changes to NAFTA reach even farther than the border states. For example, consider Iowa, which counts Canada and Mexico as its two largest export partners. The state exported about $5.7-billion worth of goods to the two nations in 2016, which was 46.6 percent of all of Iowa’s exports, according to figures from the U.S. Census Bureau. Craig Hill, the president of Iowa Farm Bureau Federation, told The [Cedar Rapids] Gazette that NAFTA should be updated to include ways to deal with new innovations such as biotechnology and gene editing.

In tiny West Virginia, there also is some interest in NAFTA. According to Wisetrade.org, Mexico is West Virginia’s third-largest export market, with chemicals claiming the No. 1 spot followed by minerals and ores. It also sends aerospace products and parts south. As for Canada, 100 percent of the engines and turbines produced in the state in 2015 were sent north, according to the Washington, D.C.-based Business Roundtable.

The next round of talks is slated to start Nov. 17 in Mexico and Lighthizer has announced an extension of negotiations into the first quarter of 2018, so there is still an opportunity to join others who are asking for NAFTA to continue. Keeping in mind that our Constitution allows the U.S. Congress to have a say when it comes to tariffs and levies, the decision can rest with others beyond the White House. Arizona’s technology industry is watching and waiting.