Festival Was Just the Start 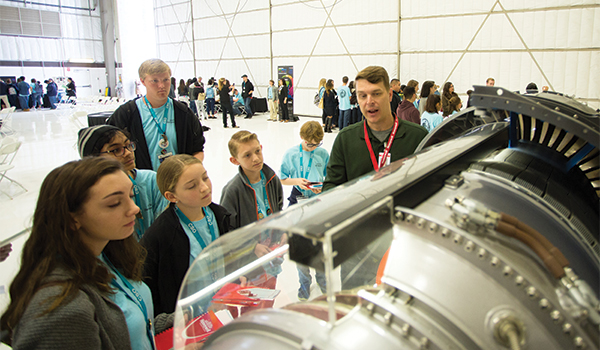 Members of the CSO program learn about STEM’s role at Honeywell Aerospace.

When the Arizona SciTech Festival debuted in 2012, it was declared a success as more than 222,000 guests attended more than 200 events. Fast forward to the February launch of this celebration of science’s sixth season: More than 800 organizations planned to stage nearly 1,500 events for an audience total exceeding 400,000.

“It’s just a really great testament to the phenomenal engagement that the community has for interest in STEM, and really attending these sorts of opportunities,” says Jeremy Babendure, Arizona SciTech’s executive director.

This level of support alone would be enough to give Arizona bragging rights. But wait, there’s so much more!

The efforts of Babendure and his SciTech team also led to the birth of a program called the Chief Science Officers that has attracted the attention of the White House and the Governor’s Office while crafting a template for other states to follow. In addition, SciTech is turning its attention to creating a community of practice for educators.

The Chief Science Officers (CSO) program began as a way to boost students’ voices in their schools and the community while increasing student interest and career awareness in science, technology, education and math (STEM) through activities and events. The number of CSOs has grown from last year’s inaugural class size of 138 from 78 schools to this year’s 220 from 120 schools. Babendure says the program is on track to have more than 300 students from 150 schools next year.

Interest has gone far beyond the schools. Arizona’s Office of the Governor in late October hosted a CSO Capitol Summit where the students learned about civic action and STEM. CSOs also were given opportunities to pitch their ideas to Gov. Doug Ducey for his feedback. One idea came from Dhruv Iyer, a student at Chandler’s Hamilton High School, who proposed having a student serve as a member of state boards such as the Board of Education. Taking it further, he already has met with Board of Education President Reginald Ballantyne III and Executive Director Karol Schmidt, says Babendure, and has been invited to pitch his idea to the rest of the board. “I find that really awesome that Dhruv’s accomplished that goal,” he says.

The summit was followed in late February with another collaborative day called the Cabinet Meetings at the Honeywell Aerospace site in Deer Valley. “It was more focused on workforce and careers with the intention that they’re going to take this information and, hopefully, bring elements of that experience back to their peers and really cultivate ideas that can be done around civic action,” Babendure says. 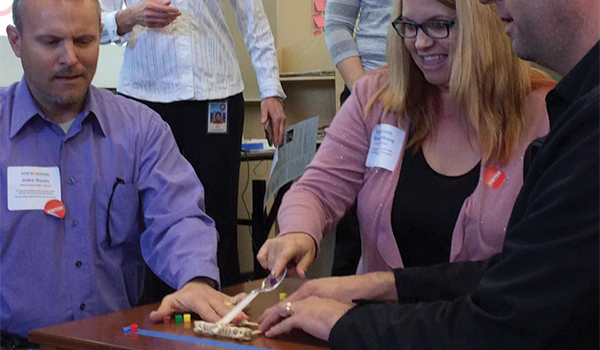 Community of Practice participants have fun as they learn in a team exercise.

The White House also has shown interest in the CSO program, leading to a May 2016 presentation where he and six CSOs met with members of the Office of Science and Technology Policy. The trip prompted Dhruv to submit a letter about the event to Science magazine, which accepted it for publication. “He actually has a published article in Science magazine, which is the hardest magazine any scientist can get into,” Babendure says. “It’s the highest impact factor.”

Since then, it seems a corridor has opened for the CSOs between Arizona and Washington, D.C. President Obama’s team got wind of an idea that Sage Foreman, a student at Centerra Mirage STEM Academy in Goodyear, originally suggested at the governor’s summit. Sage was invited back to the White House to propose to the president his idea for a national field trip day. “His, of the students’, in my opinion, was the most feasible and likely the reason why he’s probably one of few that is actually implementing his idea,” says Babendure. “We now have about a dozen or more companies that are opening their doors at the end of March for students to actually take field trips and visit what they do.” While the event starts in Arizona as a pilot, he adds, the intention would be for it to become national.

In addition, a few CSOs participated in the Million Women Mentors event in mid-January, where they were the only girls to attend, Babendure says, “which is crazy considering they’re focused on mentorship of girls but they wouldn’t have had any girls there to provide feedback.” Other CSOs were part of the Student Voice International Students Day in mid-November, he says.

With so much attention being generated, other states want to duplicate the program yet some still may wonder about its impact. A grant from the Innovative Technology Experiences for Students and Teachers program of the National Science Foundation will help evaluate the effectiveness of the CSOs in their schools and the community. “Overall, that’s helping us create something that’s replicable for these groups that are looking to take on the chief science officers in their regions,” says Babendure.

Meanwhile, SciTech has shifted part of its attention to an initiative called the Arizona STEM School Community of Practice. It came about after hearing from educators expressing interest in having STEM schools, looking to develop STEM schools or already being at STEM schools. “The funniest thing is, they often will not talk with each other and they don’t think about talking to each other,” he says. “The idea is, why don’t we form a community where they work/interface with each other and share best practices related to STEM?”

To bring them together, an application process generated more than 50 schools getting involved. In order to be a recognized team, each brings a principal, two educators, a parent, a student and a community partner to meetings where they help brainstorm how to progress the concept of STEM in their schools and communities.

Following a kickoff in May 2016, the schools gathered at Grand Canyon University in September to showcase different elements of their STEM schools. That was followed by a conference at Centerra Mirage STEM Academy in January where speakers shared information on requested topics. The final meeting of this group will be held in April at the Burton Barr Library in Phoenix. “The nice thing is, everybody’s bootstrapping it to make it work,” says Babendure. “It’s been a great way to bring together all these different schools from the communities to partner.” Planning has begun to grow and refine the Community of Practice in the 2017-2018 school year.

Compared to the newer programs coming together seemingly so fast, the Arizona SciTech Festival now can be called a tradition. “It’s really awesome to see some of these events that have been going on since the very onset continue on and having their sixth event,” Babendure says, citing such examples as Tempe’s Geeks Night Out and Night of the Open Door at Arizona State University.

While the CSOs are stepping up to take more ownership by helping to produce, promote and participate in festival events, “I think the great thing is, people just now recognize Arizona SciTech is there, almost seeming like it’s always been there, so we have a lot of street credit now in terms of what we have built,” Babendure says, “and we’re really working on these new programs and opportunities, and they’re launching quickly because of the strong partnerships that have been established through the festival.”