Arizona Will Benefit from the Trans-Pacific Partnership Agreement 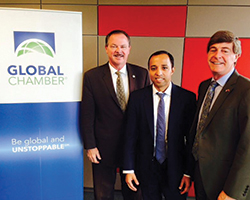 Global Chamber® hosted Luis Jimenez of the Office of the U.S. Trade Representative at our headquarters in SkySong to discuss the Trans-Pacific Partnership Agreement. Despite plenty of discussion on all sides, the consensus of experts is that TPP will help Arizona companies and create more jobs.

The U.S. is one of 12 countries that TPP covers. Signed in February, 2016, TPP has been six years in the making. Malaysia has already signed the agreement. Mr. Jimenez mentioned that all of the countries are on a path to approve it. The U.S. situation is a little cloudier because of the anti-trade rhetoric that has been infused into the process. That makes it more important for everyone involved with U.S. companies doing trade to inform their local government leaders about how important TPP is to improve their business.

Some of the key facts about TPP:

We were particularly impressed about the elimination of tariffs on all manufactured goods exported from the U.S. In addition, now the U.S. will be well positioned in agriculture where there have been tariffs — like finally allowing the “sacred 5” (beef, pork, rice, dairy and wheat) to penetrate the Japanese consumer market.

All business leaders serious about exporting should advise their representative to vote “yes” on TPP.