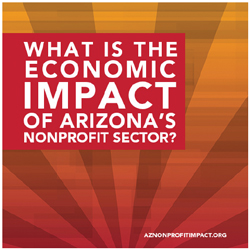 A new statewide study examined the economic impact of Arizona’s nonprofit sector and a report titled “Arizona Nonprofits: Economic Power, Positive Impact” reveals the sizeable contribution that Arizona’s large and diverse nonprofit sector makes to everyday life and to the prosperity of our state.

The findings debunk the perception that nonprofit organizations are a small component of the state economy, instead revealing a thriving and diverse network of social-purpose organizations ­— some 21,000 strong — that are a powerful economic driver. In each issue, we highlight one of the key findings of the report.

In 2014, the nonprofit sector contributed 8 percent, equal to $22.4 billion, to Arizona’s Gross State Product (GSP), positioning its contribution on a par with the state’s entire retail trade. Arizona’s 21,137 registered nonprofits collectively generated approximately $28 billion in revenue, approximately on a par with the annual revenue generated by the construction sector in the state.

Arizona nonprofits hold assets of $48.7 billion. Despite being exempt from corporate income tax, nonprofits directly and indirectly generated approximately $2.1 billion in state and local taxation in 2014 — that is, 9.5 percent of all state and local sales tax revenue.

The impact of the nonprofit sector on the state economy is far greater than its total direct spending on payroll and program and service delivery. Its direct spending starts a chain reaction of indirect and induced spending, when workers either directly or indirectly associated with the nonprofit’s program or service delivery spend their incomes in the local economy, when suppliers place upstream demands on other producers, and when state and local governments spend new tax revenues. The figure below demonstrates the ripple effect of nonprofit employment and wages on the larger economy, as economists understand it and use it in their calculations.

The research was conducted by ASU’s Seidman Research Institute in partnership with the Alliance of Arizona Nonprofits, ASU Lodestar Center for Philanthropy & Nonprofit Innovation and The Phoenix Philanthropy Group. Funding was provided by the Arizona Community Foundation, APS and the Industrial Development Authority of Maricopa County. Click here to download a free copy of the report.