The Czech Republic: Adventure in the Heart of Europe

Re-established as its own state in 1993, it is eager to share its centuries-old culture 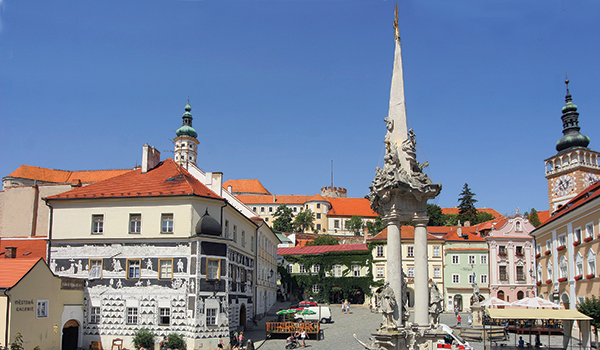 Castles, cathedrals and — perhaps surprisingly — wine cellars are among the attractions that make a visit to the Czech Republic special. History is part and parcel of the culture, from monuments maintained as treasures of the Middle Ages or functioning sites for today’s commerce to less-mellowed vestiges of the past 100 years’ political turmoil.

In the country’s main cities of Prague and Brno, rough, cobblestone streets invite exploration and there are many friendly pubs and restaurants that offer welcome. Prague, in the Bohemian region, is the nation’s capital and largest city, vibrant with pubs, shopping and theater. Its 1,100-year history as a key cultural, economic and political center of Europe includes a period as capital of the Holy Roman Empire. Any walk should include crossing the Charles Bridge, a stone thoroughfare spanning the Vltava (Moldau) River, built in the 14th and 15th centuries. Among other popular tourist sites are the Jewish Ghetto and Prague Castle.

Where else but in Brno, however, can one find a dragon? Brno, the largest city in the Moravian region, has developed a wealth of legends over its 800-year history. The Brno dragon, preserved and hanging in the entryway to city hall, commemorates the heroism of a butcher who saved the town from the dragon that had terrorized it.

In Brno’s Freedom Square is another tribute to its history: The Clock of Brno, made of African black granite and sculpted in the shape of a bullet cartridge. Called an “astrological clock,” it commemorates the 1645 Battle of Brno in which the townspeople outwitted the invading Swedish army by chiming the noon bells an hour early; at 11 a.m. every day, the clock releases a glass ball to one of the four holes in its base.

Near Brno in Cerna Hora is one of the oldest breweries in the Czech Republic, Cerna Hora Brewery, established near the end of the 13th century. Flavor is fresher than what we’re used to in the U.S., as the beer is not pasteurized or stabilized. The historic building now also houses a hotel and, in the brewery’s old cellars, a beer spa where treatments include immersion in extracts of the malt and barley left over from the beer-making. Also interesting is the brewery museum, where visitors can wander among old implements and exhibits of ingredients.

Kutna Hora, in the Bohemian region, grew through its riches of silver. It fact, its St. Barbara’s Church was built as the people’s cathedral to show off the city’s wealth. Rare in the ornamentation of cathedrals, many of its frescoes and statues depict ordinary people — from miners to monks.

The Czech Republic’s Bohemian region is better known for beer; its Moravian region for wine. With nearly 20,000 wine makers in this small country, seeking out the public wine cellars is its own adventure. Most castles have one, and in some cities throughout the Moravian region, the streets are lined with smaller ones (one such street was depicted in The Lord of Rings as a row of hobbit houses). Many wines are world-class, and the Wine Salon of the Czech Republic is a one-stop spot to sample some of the country’s best.

The Wine Salon is housed in one of the historic buildings on the UNESCO Heritage Site of Lednice-Valtice, which is near the Czech border with Austria. The grounds contain magnificent gardens and the only castle in the Czech Republic that escaped the vandalism that prevailed during its years as a communist-ruled state. Valtice Chateau is filled with exquisitely beautiful furnishings, from the inlaid designs of the parquet floors (visitors are given slippers to wear while walking through the chateau) to the china place settings on the formal dining table to the ceiling murals in the master’s bedroom. A unique chandelier in the formal dining room is fashioned from various hunting trophies that include the nose of a swordfish and the antlers of an elk.

The Melnik Castle, in the central Bohemian region, has been largely re-furnished, thanks to careful lists its owners had kept. Dating from the 10th century, it was the first stone castle in the area, and shows off wonderful architectural features. Although the Lobkowitz family lost the property to Hitler in 1939 and, later, to the Communists, they were able to reacquire it after the Velvet Revolution in 1989, and scoured the country to find the furniture and artwork. The map room is particularly fascinating. Its walls are covered in what served as maps for commerce in the 17th and 18th centuries: paintings of Europe’s important cities (labels identify “Weenan,” “Praegh” and Straesburg,” among others) showing detailed renderings of buildings, streets and other identifying landmarks. The castle’s extensive wine cellars are still in use, and visitors can see the monstrous griffin atop one of the 12,000-liter barrels. To put this size in perspective: Drinking five liters every day, it would take a person 35 years to drink the barrel dry.

Barcelo Brno Palace
Atrium lobby presents an awe-inspiring palatial façade a la the mid-19th century when it was built; décor within the rooms is a more intimate Romantic style. Within walking distance of all Brno’s major tourist attractions.

Hotel Galant
Premium in every way, from hotel accommodations to its wellness spa, its sustainability innovations have earned it multiple awards as an eco-hotel. Located in Mikulov, in easy traveling distance from the many tourist sites of the Moravia region.

Café Fara
Popular stop in Klentnice on the cycling routes in the beautiful countryside of the Palava Hills. Great wines and beers, and coffee drinks served with a stylish flair. Also offers hotel accommodations and, from spring to fall, concerts and other special events.

U Pinkasu
This was the first restaurant in Prague to serve the national favorite Pilsner Urquell on draft. Three floors plus, during the summer, a delightful garden.

U Prokuristy
With a welcoming pub atmosphere, this restaurant serves the 14 beers from one of the oldest breweries in the Czech Republic (established around 1300) and an excellent selection of beer food. Located in Hotel Sladovna, which also offers a wellness spa that features beer-related treatments.

Galerie Vankovka Brno
In the center of Brno, this shopping destination includes global fashion brands and a gallery of modern art.

ST. VOL
For shopping in Prague, this part gallery/part retail store offers stunning examples of the glassware artistry the region is known for.

Wine Throughout the Ages
A recent addition to the area’s attractions, this museum in Mikulov Castle showcases wine and its place in Czech history through exhibits and interactive displays that range from tiles that teach how to recognize different grapes to a simulated bicycle ride through the vineyards.