The JEM Foundation Fights for ‘Jake’s Law’ and Wins 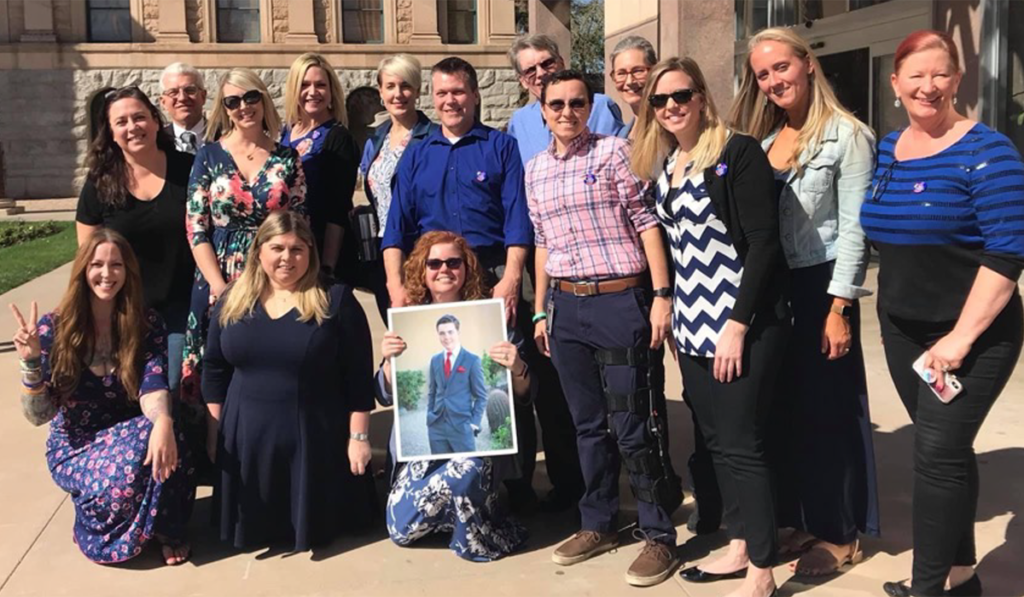 Ben and Denise, founders of the JEM Foundation, lost their son, Jacob Edward Machovsky (JEM), to suicide and vowed to do whatever they could to ensure that no one else lost a loved one in the same way.

Jake’s story is, sadly, not uncommon in Arizona. Prior to his death, he had been hospitalized twice in under two months for suicidal ideation. Both times, Jake was released in only five days. The doctor and his parents knew Jake wasn’t ready to be released, but the insurance company refused to pay for the needed care. The cost to pay for a facility without insurance was too much, so Jake was released at the end of October 2015. Not even three months later, he completed suicide.

Ben and Denise knew other families were struggling with getting access to medically necessary care and wanted to address this issue at the legislative level to ensure they had the broadest possible impact. Ben and Denise brought in professional lobbyist, Carly Fleege, to provide her knowledge and experience to help them navigate the Arizona legislature and keep them apprised of legislation associated with suicide prevention, including the Mitch Warnock Act that required suicide prevention and awareness training in Arizona schools.

In the summer of 2019, the governor’s office contacted JEM and expressed interest in finding a way to bring mental health parity to Arizona. For those not familiar with the concept of parity, it is simply the idea that insurance companies must treat mental health the same as physical health. The JEM Foundation was ecstatic to learn that the governor wanted this to be a priority for the 2020 legislative session.

Ben and Denise have selflessly dedicated their energy and focus to bringing what is now known as Jake’s Law to life. While this story is not necessarily one that happened during the recent pandemic, it reaches its most important point just prior to the U.S. shutting down. In preparation for the 2020 session, Ben and Denise worked tirelessly for months through a series of stakeholder meetings, including with insurance companies. What was most striking was a very intense two weeks in which Ben and Denise publicly relived the details of the worst day of their lives four separate times before four separate legislative committee hearings. This doesn’t even include the countless times they shared Jake’s story during meetings with members of the legislature and interviews with media. They can never be thanked enough for the emotional price they have paid to help others.

Please remember that in the U.S., 47,173 people are lost to suicide every year. Chase Field can be filled with those numbers. Suicide also remains the second-leading cause of death for ages 10-14, 15-24 and 25-34. According to the 2021 State of Mental Health in America Report, Arizona ranks 49th in the country for youth mental health, meaning we have a higher prevalence of mental illness with lower rates of access to care. In Arizona, 12.1% of youth are on private insurance that doesn’t cover mental health and nearly 60% of youth with major depression don’t receive mental health treatment. The average stay for kids who are hospitalized for suicidal ideation and mental illness is only three to five days. Many are discharged long before they are ready.

In Arizona, child suicides increased by 32% from 2016 to 2017, 68% of suicide deaths occurred in children 15-17 years of age and, on average, we lose someone to suicide every seven hours. Most importantly, please keep in mind that COVID has had a tremendous impact on everyone’s emotional and mental health and that this legislation, and what it requires of insurance companies, came just in time to help treat people and save their lives.