The Tempe Chamber of Commerce recognized businesses and community leaders at the inaugural Beacon Awards on February 26 held at the Embassy Suites in Tempe.

The award celebrates companies that have a proven record of success and growth, community involvement, dedication to employees, leadership, reliability and commitment to customer service. 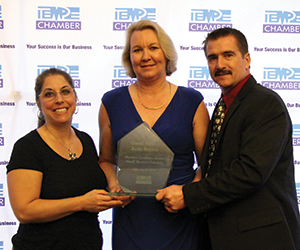 Good Works Auto Repair was named the Small Business of the Year.

The auto repair shop was opened in 2004 by husband-and-wife team Glen and RaeAnn Hayward and co-owner Nathan Merrill. It is one of only two non-dealer locations in Arizona that work on hybrid vehicle battery systems. Its mechanics donate hundreds of hours every year repairing vehicles for single mothers at no cost. It recently expanded by adding an additional 4,000 square feet and four more vehicle lifts. 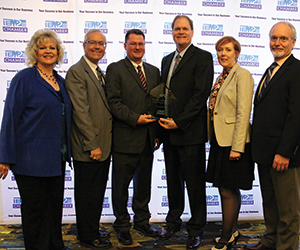 APS was named the Large Business of the Year.

Arizona Public Service is the state’s largest and oldest electric company, serving 1.2 million people. Founded in 1886 by Japanese immigrant Hochiro Onuki on his way to start silver mining in Tombstone, APS has been a leader in the development of solar generation for more than 50 years. It is the state’s largest taxpayer and has increased shareholder value by $3.7 billion in five years.

The other finalists for the Business Excellence Awards were: here on the corner, University Animal Hospital, JE Dunn Construction and TruWest Credit Union. 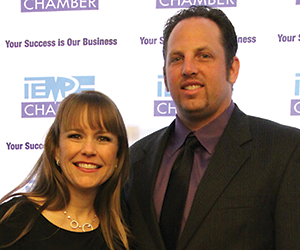 Emerging Entrepreneur of the Year:

The honor recognizes a person or organization that best embodies the spirit of entrepreneurship, engages in responsible business practices and demonstrates a passion for innovation.

Kelly Lorenzen, owner of All About Compression, was named the Emerging Entrepreneur of the Year. All About Compression is a retail store that sells fashionable compression socks and leggings to improve customers’ health by eliminating the symptoms of vein ailments. The two runner-up finalists for the award were Biostress Imagery and Ping! Development. 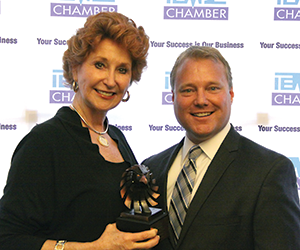 The award recognizes lifetime achievements of service, dedication and contribution to the community and honors hard work and strong commitment to improving the quality of life in Tempe.

Pat Warren was presented with the Spirit of Tempe Award. Shortly after relocating to Tempe in mid-1990s, Warren began her career at the Twin Palms Hotel and was quickly promoted to general manager. During her tenure, the hotel was a two-time finalist for the Tempe Chamber Business Excellence Award and Warren was named Tempe Chamber Business Woman of the Year in 2003. 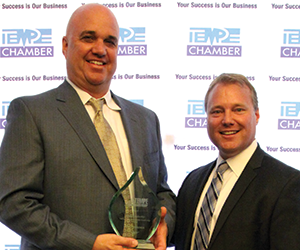 The award is an annual distinction awarded to Tempe Leadership graduates who have displayed outstanding leadership in the Tempe community.

Tempe Leadership presented its highest honor, the Outstanding Community Leader Award, to Mike Jennings. Jennings is the owner of Campus Corner. He served for five years as a member of the Tempe Leadership board, actively participating in many committees, including Tempe Cares and Tempe Youth Leadership.