Transformation helps executives and their organizations 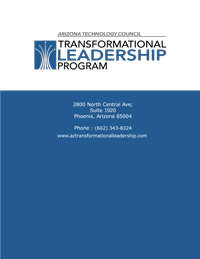 After a decade of success as president of her own company, Kathryn Odland was looking for something more for her company — and herself. She found it in the Arizona Technology Council’s Transformational Leadership Program, which “provided tremendous self-reflection, so much that I became amazed at some gaps between my perception and the perception of others in my organization,” says Odland, president of Global Patent Solutions, a research and consulting firm she co-founded to meet the needs of inventors and intellectual property professionals.

“This program taught me valuable fundamental lessons that have created a true mental shift in how I function as a leader,” she says. “Lessons are both quickly implementable and lasting for continued self-development for me and my team.”

That’s just an example of the outcomes for one member of the inaugural group of eight leaders who went through the program launched last year to move executives from simply system effectiveness and outcomes to operating from a place of valuable principles. Planning has begun for the next cohort, which starts in January 2018, says Margo Boster, CEO of ImpaQ Solutions and the program’s facilitator.

While Odland’s cohort size was eight, an ideal size would be closer to 15, Boster says. “We want to keep it small enough that it’s personal but I’d like to have it a little more than eight so that they get a better experience with their other colleagues,” she says.

The leadership training process is done through a learning community of colleagues and individual assessments delivered in classroom sessions and one-on-one executive coaching.

The program is built around 11 days of classroom sessions over a six-month period in which leaders have the opportunity to integrate and apply learned practices. In the first class, each member of the cohort identifies a leadership challenge that he or she is going to work on throughout the program. “A lot of times they’ll come in thinking they know what their challenge is,” Boster says, “but then the more they learn, the more they say, ‘Well, that was really just a symptom. My real issue is …’ So, they take that and they follow it along.”

Just because the group meets occasionally doesn’t mean work is done only on those days in class. Between each session they constantly work on their leadership challenges. They also have reading assignments. Add to that the requirement to meet at least once with a partner from their cohort group. “We want to give them these things that they also have to really integrate into their lives,” Boster says.

Cohort members also attend one-on-one coaching sessions. “I make certain that I have trained, qualified executive coaches,” says Boster, who notes they are not to be confused with life or career coaches. She is one of the four executive coaches who are available for the program.

When the six months are finished, cohort members should notice improvement in how they handle their personal challenges. “The most profound thing I tried to learn and apply is mindfulness — the notion of meeting people where they are, knowing your responsibility and being aware of how you are engaging with them,” says Christine Cross, vice president of domains at GoDaddy. “Are you opening the possibilities of discussion or shutting them down? It boils down to two words: mindfulness and intentionality.”

Boster points out that even though the Arizona Technology Council backs the program, it is not just for technology companies. “It’s for executives of all types from all types of companies,” she says. Besides Odland and Cross, the first cohort included the owner of a recruiting company, the president of a health education company and the chief financial officer of a nonprofit.

For an application or more information, go to aztransformationalleadership.com.