You are here: Home / Partner Section / Seven Extraordinary Lessons for Accomplishing Your Dream Learned from a Nine-Year-Old and an Overboard Wish
Partner Section  |  NAWBO  |  September 2019

My little one, Allie, is about to turn 10 years old. Being a social mediasavvy kid (she did grow up with a mom who worked in technology), she created a wish list on Amazon and sent me this message: “I really, really want this hoverboard. Can I get it?”

“You get allowance each week.”

“Yeah, but I need to spend that on stuff I need each week.”

“Hmm. You can get the hoverboard, but you are going to have find a way to pay for it.”

Fifteen minutes later she was back. “My allowance is $5 a week. It will take me over a year to save enough, and that’s if I save everything!”

She ran off, thrilled.

It wasn’t long before she was back again. “Do you mind if I sell some of my toys I don’t use anymore? Now that I am almost 10 years old, I have a lot of stuff I no longer need.” And with this, she became a Facebook Swip- Swap Entrepreneur. In about a week’s time, she had earned $145.

While perusing swip-swap watching for buyers, she came across a queen-size bed for $125. She had been begging for a “big girl” bed, wanting to move out of her twin bed we purchased when she moved out of her crib.

“Of course, but what about the hoverboard?”

After consideration, she decided she would like the bed more. She proudly handed over the $125, and immediately began posting her existing furniture and more toys for sale. In just a few more days, she had sold another $350 worth of items. She bought a desk for $40. She found a chair and storage bench on Amazon for $100. She bought paint for her room, another $100.

And this is how Allie transformed her room from baby girl to tween glam just in time for her 10th birthday! All with money she earned! So what can we learn from Allie about accomplishing our own dream? 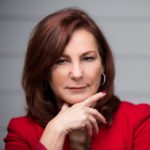 Jean Briese is Arizona’s most reviewed and highestrated speaker, an award-winning sales leader and a transformational coach.