Rights of Publicity: A Potentially Catastrophic Pitfall for the Unwary Marketer 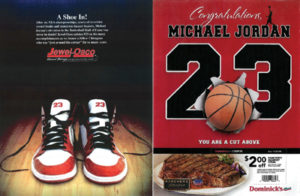 Business owners and marketing departments need to have at least a basic understanding, if not a proficient grasp, of the legal vetting necessary before using an image in an ad or marketing piece. A marketer needs to know not to use trademarks owned by other companies, when to obtain a copyright license before using a photo, and how to avoid using trademarks in her own company’s advertisements that are confusingly similar to a competitor’s mark. Importantly, a marketer needs to also understand a concept known as “the right of publicity,” which may be lurking in a properly licensed image. When marketing forgets to consider the rights of publicity, businesses are exposed to potentially dramatic legal liability. As explained below, Michael Jordan won $8.9 million against Dominick’s (now Safeway) because Dominick’s ran a print ad in Sports Illustrated without following the rules.

So What Is the Right of Publicity?

The right of publicity is the right of every person to control the commercial use of his or her identity.1 Identity goes beyond how a person looks. It also includes an individual’s “persona,” which includes such indicia of identity as name, voice (including sound-alikes), signature, distinctive phrases and biographical information.

For example, Dominick’s got slammed when it used an ad (shown below), even though it did not include a photo of Michael Jordan — it featured only his name and jersey number 23. As innocent as this may seem, Dominick’s didn’t have permission to use the name or the jersey number in its ad.

How Did the Jury Arrive at an $8.9 Million Damage Award?

The right of publicity is protected by statutes and/or case law, and the law can vary from state to state. Generally, a plaintiff is required to show that a defendant used the plaintiff’s identity for “commercial purposes.” And it is safe to assume that the use of an individual (or her persona) in an advertisement will be considered commercial use.

Michael Jordan’s case is an interesting one. By all accounts, the $2-off voucher on Dominick’s ad featured above was a total flop. The voucher was redeemed by only two customers! However, damages in a right of publicity case are not based on the success of the ad. Instead, the award is based on the value of the plaintiff’s identity, which is evaluated under formulas recognized by the courts. Jordan presented evidence that he highly values his image and does not sign endorsement deals for less than $10 million. Although a staggering number, the jury seemingly used this rate to find that the value of Jordan’s right of publicity equated to $8.9 million.

That award is not altogether isolated. Dustin Hoffman was awarded $1.5 million in compensatory damages as fair market value for use of his name and likeness (although the case was later overturned on appeal for other reasons). Tom Waite was awarded $375,000 after Frito-Lay used of sound-alike of his voice without his permission. As the verdicts in these cases demonstrate, infringing a person’s right of publicity can be a costly mistake.

Bottom Line: How Do You Protect Yourself?

To avoid a potentially costly right of publicity claim, begin legal vetting of an image with obtaining a photo license. But don’t stop there. Also consider the content of the photo. If the photo includes an identifiable individual, a name, or some other indicia of identity, consider whether a right of publicity release is necessary. A license for use of the photo will not protect you should an individual pictured bring a right of publicity claim. Finally, you should be careful to obtain permission from all the proper parties. Rights of publicity, especially for deceased individuals, may have been inherited by a few descendants. Thus, make sure that all parties with rights have signed a proper release.