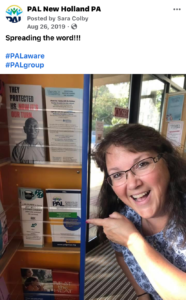 Parents of Addicted Loved Ones, or PAL, started in Phoenix in 2006 as a weekly support group but, due to intense demand, grew quickly and became a nonprofit in 2015, fully supported by volunteers. The first paid staff member was hired in 2018 — CEO/Executive Director Kim Humphrey — and now, just a few years later, PAL has 167 meetings in 41 states. The genesis of the organization is a simple but critical one: While individuals were receiving attention and treatment for their addictions, there was little support for parents and family members faced with the challenges and stressors of dealing with an addicted loved one.

Parents of Addicted Loved Ones is unique in that it depends on trained volunteer facilitators to lead free weekly meetings based on an evidence-based curriculum, studied and verified by NAU. Participants are also provided time to share their experiences and “cross-talk” with one another in a format not widely used by similar groups.

The key to the success of PAL is the more than 300 facilitators — 70 of whom are based in Arizona. Those volunteers are on the front lines helping parents and are, in the words of PAL Communication Director Dinah Brookes, “heroes who are changing and saving lives.”

PAL groups normally meet in person, but with the pandemic found they needed to find a new way to keep their support networks functioning. At that time, Zoom was not a word in everyday usage and, while some of the facilitators were comfortable using the virtual format, it was a huge technological stretch for others.

Within weeks of many aspects of the U.S. shutting down, PAL was able to train the facilitators, who in turn helped their parent attendees with the new skill and gamely found ways to reach out and keep the personal relationships going. And, at least in the case of some facilitators, PAL entered “The Season of Improvisation” using laundry baskets to get the laptop at just the right angle. Other facilitators offered extra meetings through the season of COVID or reached out to call parents outside of meeting times because as the pandemic intensified so did drug and alcohol usage and overdose deaths. This change — and all the other changes — were all done in the name of helping others.

The Alliance congratulates and thanks PAL — especially the volunteer facilitators nationwide — for not allowing the pandemic to stand in the way of their life-saving work and for providing an inspiring example of resilience.