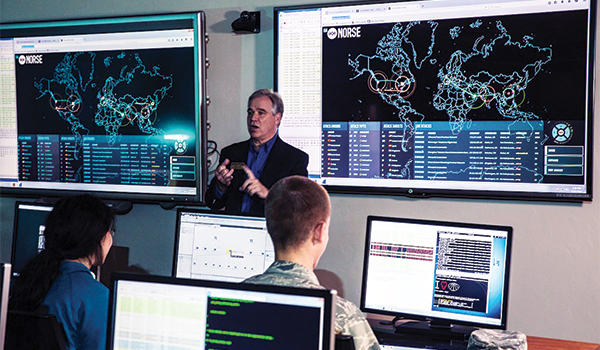 Not too many organizations can claim that one of its members is home to the College of Security and Intelligence, which trains professionals — cyber and otherwise — to work at the national and international level. And not too many cities can claim it’s home to this college.

Embry-Riddle Aeronautical University in Prescott is one of the newest members of the Arizona Technology Council (and, actually, there is no other institution like its college in the nation). Another new member, the City of Prescott, is the base for the western campus of the world-renowned aeronautical university. These new relationships actually signal an effort by the Council to build a member base in a city that perhaps is best known for tourism.

“Prescott has a great university in Embry-Riddle, a great community college in Yavapai College, lots of smart people and a desirable quality of life,” says Steven G. Zylstra, president and CEO of the Arizona Technology Council. “We want to help the Prescott area grow the number of technology companies — our future members — that call that area home.”

While Zylstra sees the value in Prescott, it hasn’t been easy getting people to the table. “We have been trying to get a critical mass of members up there for years,” he says. The difference now is James Robb, the city’s economic development consultant. Robb carries extensive experience from his work in software and technology in the hotbed of Seattle. “I was there from the beginning as software grew,” he says, adding that he took the lead in taking companies public and was involved in mergers and acquisitions.

Robb also knew about the Council from conducting strategy sessions with members in the group’s early days when he lived in Scottsdale and before he started doing consulting around the country. “So I really believe in it,” he says.

Ultimately, Robb moved to Prescott and was hired by the city earlier this year. One of his first actions? “He helped us get the city and Embry-Riddle to join,” Zylstra says. Robb saw these memberships as ways to get a tech presence by at least acknowledging the Council and what it offered. “If we’re going to have a future in this community,” he says, “you have to have something besides tourism as your economic engine in the 21st century. That’s going to come through technology.”

At a more grassroots level in a rural community that has had no technology industry and some people not fully understanding what he was trying to accomplish, he viewed the Council as a way to help. “I actually went on [the Council’s] website and I would walk them through different sections to show them the website,” Robb says. “It was like taking a kid to a candy store and they would go, ‘Oh, my God. We never realized that this was going on.’”

With a game plan ranging from incubation to innovation, Robb understands that the resources of the Council are what his community needs. “I’m going up there to meet with the business leaders to try to help them figure out how to be more attractive as a tech destination,” Zylstra says. Meanwhile, Robb says he will continue working to get more members. “I want us to have 12 to 15 members just in the Prescott area and grow from that,” he says. With such growth, Zylstra sees the potential of having quarterly meetings in the city.

The Council’s announcement that its upcoming CEO retreat will be held this year in Prescott was met with heightened excitement at city hall. The city will be a sponsor of the annual event that brings together technology and other leaders from throughout the state. Robb says he already has spoken with Embry-Riddle about its professors facilitating off-site sessions as an option for the retreat.

Robb also sees benefits by teaming with the Council for events beyond the retreat. There is Prescott getting direct exposure to the state’s technology community and how the city can fit into it. Add to that the gain in credibility. He already envisions that partnering with the Council on different conferences could bring in the decisionmakers so they “see a place where maybe they could put a satellite office and we could start to grow in infrastructure here.”

For the Council, Prescott offers potential for its own growth beyond its strong membership bases in Phoenix and Tucson. “We have expansion plans for Yuma and Sierra Vista, too, in the south,” Zylstra says. “We wish to be a truly statewide organization and represent technology companies wherever they are. The idea is that innovation can be anywhere.”