New Director at the Helm of SciTech Festival 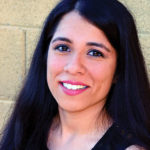 For anyone who has even been to an event staged as part of the Arizona SciTech Festival, there’s a good chance that Marisa Ostos has been right there, too. “I think she’s done more, seen more events, gone to more events than anybody around,” says Jeremy Babendure, Arizona SciTech’s executive director. “She just has passion for it.”

It’s fitting Ostos marks her sixth year with the festival — starting as an intern while attending Arizona State University — as the director of the statewide phenomenon that this year is expected to draw more than 450,000 attendees. Of the promotion from her previous role as assistant director, Ostos says, “It was exciting to hear that I had the opportunity to help steer the SciTech Festival in a direction that I thought would really help to become even more amazing than it already was with Jeremy’s vision.”

She certainly has the grounding for the job, having served in such roles as manager of the festival’s volunteer and STREET Team, as well as community liaison between the festival and its more than 100 signature events and community partners. Her background also has helped, as she comes to the organization as an interdisciplinary studies/psychology and history major after switching from molecular bioscience. “I always had a base in the sciences,” she says.

The position also gives her the chance to continue witnessing the festival’s impact firsthand. For example, when doing STEM activities as part of community outreach, she has seen entire families touched. While parents don’t really like to get involved with the experiments initially, “after a while they sometimes are the ones who become more gung ho about trying out everything.” Still, it’s hard to believe anyone could be more gung ho than Ostos.