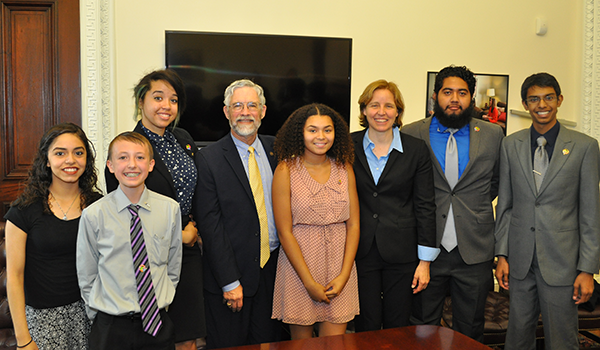 CSOs (from left) America, Sage, Dominique, Marie, Jonathan and Dhruv with John Holdren and Megan Smith at the White House.

Imagine launching an idea unlike anything that’s been done. Now imagine that idea gets the attention of colleagues across the country. Even better, the White House is interested.

This is what is happening with the Chief Science Officers (CSO) program, which puts Arizona students in charge when it comes to getting their schools interested in science, technology, engineering and math (STEM). The program is an affiliate of the Arizona SciTech Festival, which counts the Arizona Technology Council Foundation as one of its foundational sponsors.

The interest in the CSO program reached this pinnacle when six students — from sixth grade to high school seniors — made their way to Washington, D.C., in mid-May to promote their program to Arizona’s congressional delegation as well as members of the White House Office of Science and Technology Policy (OSTP). They were accompanied by Foundation CEO Steven G. Zylstra and Executive Director Jeremy Babendure, who also is the Festival’s executive director.

By coincidence, Zylstra, Babendure and the students were there the same week as the annual White House Science Fair. “What made it timely for us is, at the White House Science Fair was a student who said to the president that there really should be more student voice and a student science advisor,” Babendure says. Enter the CSO program, which already has gained some traction in Arizona with 140 students in the role at their respective schools throughout the state.

The way to Washington actually was first paved earlier this year when Zylstra was contacted by Marc Wynne, who until August 2010 had been an administrator of the Arizona Health Care Cost Containment System. Wynne now is a fellow in the White House Leadership Development Program assigned to OSTP. “He knew we were coming to Washington for other meetings, so he called up and said, ‘How would you like to come to the White House and meet with the OSTP?’” Zylstra says. Separately, Rep. Raul Grijalva had invited CSOs to make their case to Congress on the benefits of their program.

That led to the May meeting with Grijalva and others, capped by Zylstra and Babendure guiding the students through the halls of Congress to talk with Arizona’s lawmakers and their staff. “The kids enlightened our congressional delegation on the CSO program and sought their support in different ways,” Zylstra says.

At the White House, the Arizona group led a briefing that included OSTP Director John Holdren and U.S. Chief Technology Officer Megan Smith. “She basically challenged us, saying, ‘What would it take to actually start a CSO cabinet in every state of the nation?’” Babendure says. Although not at the meeting, “we do know the president has been informed about the CSOs” in Holdren’s weekly update to Obama, Babendure says.

Word of the successful trip has spread. Since arriving home, Babendure has been fielding calls about spreading the CSO program to the other states, “We’re thinking about making it more like a franchise system,” he says. “We really are at the onset of a national movement, and I think this meeting with OSTP really was that catalyst to make that happen.”