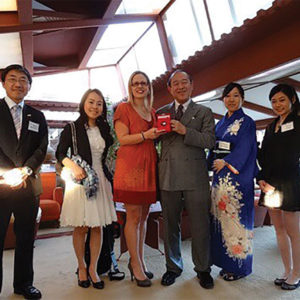 Rep. Sinema in 2015 with Ambassador Fujisaki of Japan at Taliesin West. Thank you to Frank Lloyd Wright Foundation for your membership and support — and for hosting that Global Chamber® event. And thank you to all our members, in and out of politics.

A blue wave? What color is a cross-metro area growth wave? That’s our focus — helping members grow anywhere they wish to by sharing the resources and prospective clients and partners they need. We are a trusted advisor for anyone growing across metros and borders.

Global Chamber® is not political. We do not take a stand for or against any particular party or candidate. We just want more business and trade. Our initiatives are business-focused, working with companies nearly solely, and along the way we engage with government leaders to make them aware of global business and to encourage their engagement.

Pick any 10 countries. Can you name their top political parties and what they stand for? Do you know their leader and government form? Now imagine that across all 195 countries — could you do it? Former CIA head Bobby Inman has spoken at Phoenix Committee on Foreign Relations and he could answer questions about any country, past, present and expected future. When I heard him speak, I realized, first, how brilliant he is, and second, that no mortal person can have their finger on every political party and issue. And that’s one good reason why we don’t wade in. Can you imagine our Global Chamber Moscow team coming out in opposition to Vladimir Putin? That’s not going to happen. We focus just on the things that matter to businesses and leaders … and make warm connections along the way. Our personal politics stays personal.

That all said, we love politicians who “get it” and who are dedicated to improving business and the lives of people within their district and country. And so you will see us supporting leaders who help our members be successful. One of those leaders is Kyrsten Sinema, now Senator-elect Sinema, who for years as a congresswoman demonstrated hard work and intelligence in the areas that matter to our members. She has been open to meet, to listen and to support their success. We have been proud to host Senator-elect Sinema as a speaker several times. Don’t let anyone convince you that all politicians are bad — it’s nonsense. Let’s celebrate good leadership in companies and the government — and work to get better at all of it.

We’re always happy to have a dialogue with the goal of assisting in our mission of facilitating cross-metro business success. Blue, red, green or any color wave — let’s keep growing across metros and borders, the cross-metro wave! That’s the wave we care most about. It’s here, it’s real, and we hope you’ll join us to create more cross-metro and cross-border business success.