Council members are part of delegation that explores new opportunities 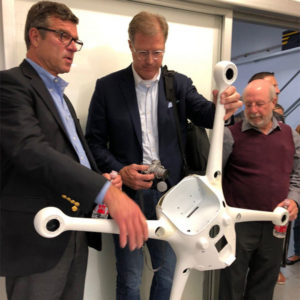 There’s no denying the international outreach of the Arizona Technology Council. President and CEO Steven G. Zylstra has added his signature to an agreement formalizing a bilateral relationship that promotes growth and expands business opportunities for the Greater Phoenix and Hermosillo metropolitan regions. China was the destination for past trade missions he helped lead. And member companies have bases as far away as Canada and Japan.

Add the Middle East to this global roster.

A delegation from the Council and Arizona Israel Technology Alliance traveled together in October to strengthen the growing business ties between Arizona and Israel, and support the transformative, innovative companies emerging from both geographies.

The first destination was Tel Aviv. It started with a guided walk down Rothschild Boulevard, the main avenue of the city. One stop was the site where the Israeli Declaration of Independence was signed on May 14, 1948. The group heard how then-stateswoman Golda Meir said, “After I signed, I cried,” leaving a lasting impression on the visitors from Arizona.

Seeing early photos of the desert landscape where skyscrapers now stand helped everyone appreciate how far Israel has come. Overlooking the Tel Aviv skyline at the first stop drove the point home. The eye-popping view of the skyline from the top of TLV Labs made it clear that billions of dollars from the high-tech riches are pouring into the city.

Both companies are graduates of the 8200 accelerator founded to help early-stage ventures solve social problems through technology. These innovators are all looking to enter the large U.S. market from Israel, providing states like Arizona opportunities for partnerships.

Maverick Ventures is dedicated to the success of Israeli companies and its portfolio includes companies such as privately held Orasis Pharmaceutical, which is eliminating the need for eyeglasses with a revolutionary eye drop. Carni and Shapira provided example after example of innovative companies looking to establish a presence in the U.S.

The next stop was AIROBOTICS, which has chosen Scottsdale as the site of its U.S. headquarters. It eventually will shift its global headquarters to the Arizona city after it scales up production of its industrial drones. At AIROBOTICS’ location in Tel Aviv, Vice President of Marketing Efrat Fenigson served as guide, showing the drones’ manufacturing facility, as well as demonstration flights that put the aircraft through their paces.

AIROBOTICS also hosted an Israel/Arizona reception attended by more than a dozen executives from companies such as Elbit Systems, which recently acquired Tucson-based Universal Avionics for $120 million so it can expand its portfolio with cockpit solutions for commercial OEMs and aftermarket customers.

Next, the group journeyed to Jerusalem, the land of golden opportunities. One stop was OurCrowd, an equity crowdfunding platform for investing in Israeli technology startups led by serial entrepreneur Jon Medved. The delegation of Arizona business leaders lit up as they heard Medved describe the concept of gaining access to VC-level opportunities by investing online in fully vetted companies with innovations that are changing the world.

“Almost all investment returns are now private,” he said. “Take, for example, Facebook’s IPO in 2012. It was the biggest in technology and one of the biggest in Internet history, with a peak market capitalization of over $104 billion. Over 95 percent of the investment came from private money that the majority of public investors didn’t have the ability to participate in.”

Eric Miller, principal and co-founder of Tempe-based PADT, was especially impressed with the model of OurCrowd and the quality of companies that the organization’s highly selective deal flow has uncovered. He spends a great deal of time vetting and counseling startups through PADT’s participation in Arizona Tech Investors and volunteering with the Arizona Commerce Authority.

“This type of alternate financing is beneficial for both startups and investors,” Miller says. “It helps entrepreneurs get access to the capital they need to get off the ground without having to pitch to a dozen different groups, and an opportunity for angel investors to come together, take advantage of professional due diligence and participate in deals that are normally only available to large institutional investors.”

The Arizona Israel Technology Alliance has been working closely with OurCrowd to provide Israeli-based companies establishing a presence in Arizona access to capital from this well-connected global investment community.

As members of the delegation learned, Arizona and Israel have a lot in common. They share water issues, border issues and embrace diversity. Both societies are extremely supportive of the entrepreneurial spirit and have a lot of brainpower to offer. “I was struck by the incredible parallels between Arizona and Israel, and by the interest in and potential for a phenomenal level of collaboration, business opportunity and trade,” Zylstra says.

For other members of the visiting group, it was not a stretch to say the trip served as a springboard for more good news to come. They expect building a closer relationship with each other will pay dividends in the years ahead.

“This was an amazing opportunity to see firsthand the Israeli ecosystem which has produced scores of promising new tech companies,” says Quinn Williams, corporate securities shareholder at Greenberg Traurig. “Israel and Arizona share many common economic factors, including the dependence on new entrepreneurial companies.”

Hank Marshall, economic development executive officer for the City of Phoenix, says, “Arizona and Israel have always had an abundance of compatibility. The facilitation of greater business opportunity between Arizona and Israel requires more than compatibility; it requires connectivity. The trip served to catalyze the necessary connectivity that will drive the relationship and outcomes to an entirely new level.”