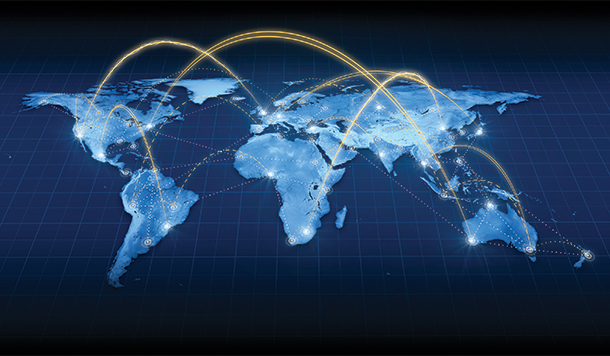 With 85 percent of business growth happening outside of the U.S., and more than 99.7 percent of new business being created outside of Arizona, more and more companies and communities are accessing new global opportunities. That’s why we’re here — helping members of Global Chamber® access new opportunities.

It wasn’t always that way, as Arizona historically has made slower progress with international trade compared to most coastal states and other regions, including Colorado and Illinois. Those states, along with Florida, New York and California, have higher exports per capita and foreign direct investment (FDI). Exports and FDI support approximately 190,000 jobs in Arizona, and, if the state could deliver global business like those states, another 100,000 jobs would be created. That’s the benefit of looking outside our borders for opportunity!

Many regional businesses have seen the opportunity of tapping into the global pool, and they’re bringing money back to Metro Phoenix in the way of export dollars, foreign direct investment and tourism. Jerkovic’s overall report card of B+ for Arizona was an improvement from four years ago when the region was, at best, a B-. For example, regional export success stories that are creating jobs include BioHumaNetics, growing aggressively in Latin America; Wisdom Natural Brands, a recent winner of a national U.S. export award; and GlobalMed Telemedicine, gaining significant national and international contracts in 2017. Exports from the metro have grown to $12.8 billion per year, with top export markets being Mexico, Canada, China, the UK, Germany, Singapore, Japan and Thailand.

Also, regional foreign direct investment successes are on the rise. These include IRIS USA from Japan in Surprise, and Scientex from Malaysia and Zummit Plastics from Mexico in Phoenix. These are significant investments that found their way to Arizona. The region still has a long way to go, but we are lucky to have many talented business leaders here who are blazing the trail to grow exports and encourage investment.

Global Chamber members are involved with global business through exporting, importing, tourism and investment. For instance, it is noted that some recent notable commercial real estate transactions have a global component. “Like the 618,000-square-foot deal signed by UPS as a distribution hub for e-commerce,” says Rod Beach, principal at Cresa Phoenix. “In addition, McKesson moved from Old Town Scottsdale to the 101 in Scottsdale, increasing their presence in the local market, driven by global growth.”

The City of Phoenix has grown to almost 1.7 million residents, ranking as the 5th most populous city in the United States. As more business continues to expand and relocate to Phoenix, industry has become more diverse.

Some of the metro cities, especially Surprise and Phoenix, and to some extent Tempe, have global programs in place to increase exposure to, and success with, foreign investors. Activities like Jeanine Jerkovic’s recent meetings with Global Chamber members from other countries and her team’s active work in Toronto, bode well for future growth and success.

“More medical offices, call centers and other firms are moving to retail centers to take advantage of their abundant parking and easy access,” says Paul Blum of WestUSA Commercial Real Estate. “Forward-thinking developers and contractors will benefit from repurposing shopping centers and industrial buildings to the new economic imperatives.”

The recent announcement of Bill Gates’ development or the new City of Belmont near Buckeye will have major global and local implications as well. “The impact of Belmont on the Arizona economy will be tremendous,” says Anita Verma-Lallian, director at Vermaland. “The region will benefit from the growth of Belmont. Additionally, not only does it identify Arizona as a cutting-edge place to build a city of the future, it highlights the natural characteristics Arizona has to support a cutting-edge city that will revolutionize future developments.”

Tapping into global opportunities drives success locally. According to NAR, Infographic Report 2017, “US Home Sales to Foreigners Skyrocket,” Arizona is highlighted as one of the top five states for foreign buyers, along with Florida, Texas, California and New Jersey, with total sales of $153 billion.

“That is a 49-percent increase from the year before from top nations, such as China, Canada, UK, Mexico and India,” says Maha Kapageridis, Realtor® with Berkshire Hathaway Homeservices Arizona, working with foreign investors.

Are you interested to learn more about the global business opportunities?

Doug Bruhnke is CEO and Founder of Global Chamber®