Global Impact in the Sights of Committee 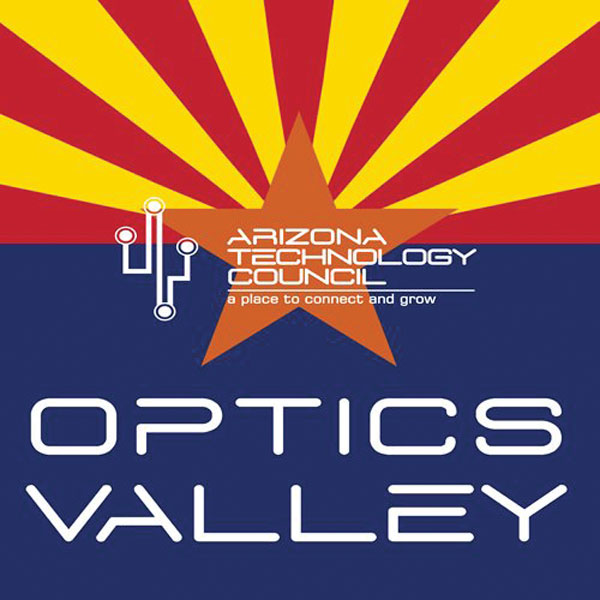 With a focus on success, Optics Valley members have been working to capture the world’s attention for an industry that serves fields ranging from aerospace to telecommunications. A new workforce development program now gives this Arizona Technology Council committee the chance to influence others who are considering joining this cutting-edge profession.

Formerly known as the Arizona Optics Industry Association (AOIA) before becoming part of the Council in 2016, the group’s title actually can be traced to an October 1992 Business Week cover story about pockets of U.S. technology flourishing beyond Silicon Valley, explains Co-Chair John Dennis, “and that’s where they nicknamed Tucson Optics Valley.” But the goal isn’t to limit membership to the Old Pueblo. “Now we’re taking our call to be a statewide organization very seriously and we actually welcome the opportunity to open up more of a footprint,” says Co-Chair Jack Schumann.

While both Dennis and Schumann were very active in AOIA, they recognized what a relationship with the Council offered. “Being part of the Council gives us a platform and an infrastructure to move forward with,” says Dennis. That included spreading their message through programs such as Lunch and Learns and after5 Tech Mixers. That has helped Optics Valley membership climb to 75, with several now in Phoenix and even Lowell Observatory in Flagstaff.

It’s other activities, however, that are making that footprint global. Dennis says members have helped boost Arizona’s presence in the optics pavilion at Photonics West, an annual conference in San Francisco that draws the worldwide optics industry. Optics Valley has conducted its own industry conference called Arizona Photonics Days, where the activities of technology and in Arizona are highlighted. “We invite worldwide companies to come and visit with us,” he says.

Schumann is especially proud that Optics Valley is one of the co-investors/co-creators of the Global Photonics Alliance, a co-op of about 30 photonics clusters from around the world. This offers the chance for business-to-business networking on the international stage. In fact, Dennis says, some alliance members were among the more than 100 registrants who made the trip to Tucson for Arizona Photonics Days.

In turn, Optics Valley takes its show on the road. Schumann was making plans to go to Israel for a Global Photonics Alliance event. Around the corner are conferences in Munich and San Diego. “Supporting those for our members is important,” Dennis says.

What is getting the two group leaders more excited is a new effort to prepare more people for careers in optics. Strategy1 Services, a Council member whose president and co-founder is Dennis, has been awarded a Small Business Association (SBA) contract. “Our goal is to position Optics Valley as the leading organization for galvanizing optics innovation and talent, and to provide a central network for established optics leaders,” he says.

In addition to the Council, key program partners include Pima Community College, which had an optics technician program in the past; The University of Arizona; Tech Launch Arizona; and Tech Parks Arizona. “We now have been able to assist Pima Community College in getting new wind under their wings and they are ready to start a new program,” Schumann says. Additional support for technology creation and invention will come from the university’s College of Optical Sciences, BIO5 Institute and Steward Observatory.

Schumann says the search is on for part-time faculty and could even start this summer depending on the hiring outcome. “Workforce availability is a worldwide problem in our industry, so we are taking it very seriously,” he says of the effort to get ready for launch.