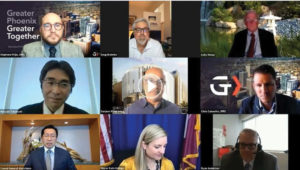 In the past couple of months, Global Chamber® has held two significant events in collaboration with regional business and government leaders that spotlighted growth opportunities in Arizona for foreign companies and investors and the international business opportunity overall. The cities of Phoenix, Surprise, Scottsdale and Peoria, especially, are leading the way to support local companies and encourage foreign companies to land here.

First, we held an “Invest in Arizona” program that was held in collaboration with the City of Phoenix and the Country of Japan to share business benefits of investing in Metro Phoenix. We were pleased to feature Senator Kyrsten Sinema, Senator Mark Kelly, Mayor Kate Gallego, Thunderbird Dean Sanjeev Khagram, Chris Camacho (GPEC) and three Japanese companies that have had success in Arizona — IRIS USA (Surprise), MUFG Union Bank (Phoenix) and Yokogawa Electric (Tucson). We were treated to a compelling review from the regional leaders of why companies should consider Arizona, and we also heard from the success story companies. Subsequent to the session, we received additional inquiries from Japan and other countries about next steps and what it will take to land in the region. Welcome! The wrap-up and recording for this program are available on the Global Chamber® blog.

Secondly, we held our annual “International State of Metro Phoenix,” which in 2007 was the very first event that we did, centered on the question “How are we doing?” When we became Global Chamber® six years ago, we institutionalized a report card with the help of regional leaders that identified where we’re making progress and where we still need to get better. Thank you to all the leaders involved over the years, especially Hank Marshall with the City of Phoenix, who has done the report card several times, including most recently in 2021. We were also able to hear from Hank, Mel Sanderson (Western Rare Earths), Emily Cloke (British Consul General in Los Angeles), Jack McCain (American Airlines), Arizona State Representative Lorenzo Sierra, Jeff Campos (Southwest Valley Chamber of Commerce), Jane Spicer (Daphne’s Headcovers) and M. Brett McMickell, Ph.D. (Ag Junction). Inspiring exporting success and more! This program is also on our blog and on youtube.