Impact of SciTech Festival felt as far as Latin America 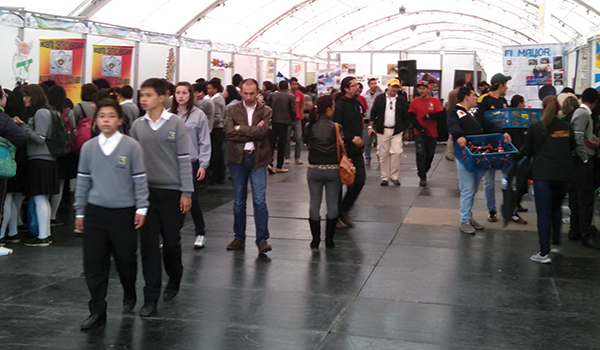 When the Arizona SciTech Festival was created, one of the ideas was to use science, technology, engineering and math as a way to draw the state together. Little did organizers realize it had the potential to bring the world closer together.

Launched by the Arizona Technology Council Foundation and Arizona State University in 2012, the festival’s success was to be partially measured by its being embraced by the state. But the festival’s reach actually went farther when the town of Mosquera, a suburb of Bogotá, Colombia, used it as the model to recently stage its first Science and Technology Week.

It all started when festival director Jeremy Babendure fielded an inquiry from Germán Mauricio Rodriguez Mogollon, principal of Mosquera’s Marie Curie School, which was created with the mission to educate the next generation of scientists. “It’s a real STEM school but in Colombia,” Babendure says. Rodriguez was looking for ways to communicate science to the public when he learned about the Arizona festival.

What ultimately resulted was the Science and Technology Week that drew about 8,000 students from public and private elementary and high schools. “Compared to the United States, there are less than 300 scientists in the entire country there, so it offered a huge potential impact to work with this site,” Babendure says. Steven G. Zylstra, president and CEO of the Arizona Technology Council, flew to Mosquera on behalf of the Arizona festival to witness the international outreach come alive. “It exceeded my expectations,” he says. “I was amazed at how far they came in a short amount of time.”

After the initial conversation with Babendure, Rodriguez and wife Fabiola Grisales Mayorga, the school’s academic director, agreed to learn firsthand about the SciTech Festival. Babendure set up meetings in Arizona with various festival collaborators and partners. Since they were coming in September, he even accompanied the couple when they attended the Flagstaff Festival of Science.

Liking what they saw and learned, the couple returned with two additional teachers and nine students in February when most festival activities are held. Besides visiting multiple events and venues during their trip, the city of Chandler through Odette Moore, economic development specialist, hosted them for several of its events. The visitors even made their own presentations at the city’s Science Saturday.

Buzzing with excitement after returning home, Grisales met with Mosquera’s secretary of education to propose a science fair and left the meeting with a commitment, including the dates of Sept. 30 through Oct. 3. As the Colombians worked to prepare, Vicki Massey, Arizona-based district director of the National Science Teachers Association who met Rodriguez during his visit earlier this year, went to Colombia last month to lead training sessions with 60 teachers.

Science and Technology Week began with students visiting university labs, interactive centers, ecological sites and businesses. That was followed by a two-day science and engineering fair where university and high school students presented more than 100 projects. Younger students listened to speakers who included Jim Buizer, deputy director for climate adaptation and international development at The University of Arizona’s Institute of the Environment, who delivered the keynote via Skype. The week ended with students from different high schools participating in a robotics competition. “Our festival was a replica of what we learned in Arizona but with some additional things like conferences,” Rodriguez says.

Zylstra expects more to come in this new partnership. During his trip, he met Colombia’s secretary of science and technology, who expressed interest in attending the 2015 Arizona SciTech Festival and even replicating Mosquera’s event in other Colombia sites. Festival representatives and Rodriguez also will explore the potential of countries adjacent to Colombia staging their own science and technology events, Zylstra says. “I see this as growing into a more extensive collaboration,” he says.

To see highlights from Mosquera, go to www.youtube.com/watch?v=OzTBmRIJjhE.