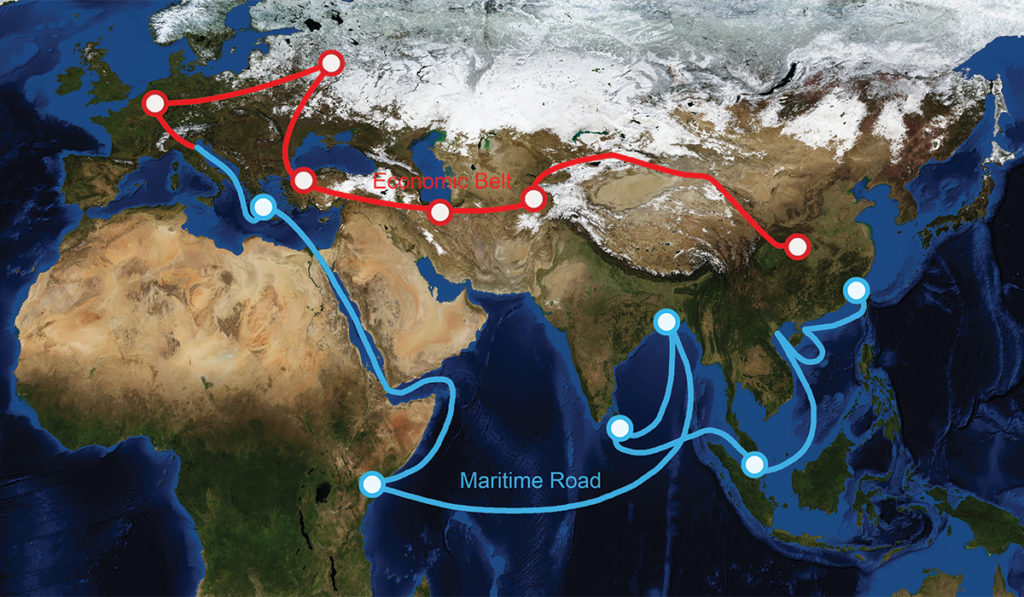 The Belt and Road Initiative is the largest initiative of the 21st century in terms of projected impact and given the strong political and financial drives behind it. The Chinese have called this initiative a bid to enhance regional connectivity for a brighter future; others have called it a push by China to create for itself a global role and to position itself in the middle of international trade. An expansive economic and geopolitical strategy, the Belt and Road Initiative is already creating substantive ripples, even at its formative stage.

In our recent event on BRI, we invited experts with a view across metros and continents to discuss the strategies and current progress of the Belt and Road Initiative and what repercussions it will have for future international business. The BRI will create a network of railways, roads, pipelines, shipping lanes and utility grids that set up an extensive infrastructure to connect China to countries stretching through Central Asia, Russia, Europe, Southeast Asia, the Middle East and Africa. Seventy countries will be covered in this initiative that compose approximately two thirds of the world’s population and one third of the world’s GDP.

There are two main components:

The goal is to create a regional framework that enhances economic cooperation and the free flow of trade through strengthening both hard and soft infrastructure with new physical routes and increased people-to-people exchanges. With Chinese investments currently approaching $4 trillion, this will be the world’s largest platform for economic cooperation, policy coordination, financial collaboration, and social and cultural affinity promotion.

The initiative is primarily funded by the Chinese government and will, firstly, serve Chinese interests; participating countries mostly do not have the means otherwise to build the scale of infrastructure that China is offering. Still, many nations are very open to this project, and, as explained by Abelhak Benkerroum, founder of Eastheimer Consulting, this comes in part from China’s willingness to work with any government. Unlike the European Union or the United States, China would not question a nation’s controversies with human rights or nature of power before offering infrastructural aid. Syria and Yemen are such examples. Furthermore, China is flexible with negotiating payments and low-interest loans, and securing money is probably the last thing they think about. If a country is unable to pay off their loans, China is willing to accept other assets like infrastructure sovereignty and influence over the region to compensate, extending a sort of “debt-trap diplomacy.”

Enacted as a response to the global economic crash of 2008, the BRI is China’s intention to become less dependent on western economies and politics and to consolidate for itself economic preeminence and ideological hegemony. This initiative is about securing both resources and market access for China. Historically a resource-poor country except in human labor, China is looking to establish stronger economic ties with resource-abundant regions to reduce duty costs and set up manufacturing hubs along the routes. Furthermore, trade route access has been one of China’s primary concerns for the last decade. China currently exports primarily through the South China Sea, and heavy militarization in that area by both western powers and China has disturbed trade. With the maritime Silk Road, 80 percent of the globe and almost 100 percent of China’s existing markets will be covered. Ultimately, the BRI will secure imports for China and protect its current and future exports.

Also, with increasing disruptions on international trade agreements, such as tariff increases sweeping across North America and the increase in the number of trade protectionist policies, several countries are already restricting trade and more are expected to follow. The BRI will secure China’s trade agreements. Furthermore, with this initiative, China can easily access the resources of participating countries without creating much political upheaval, unlike recent sojourns by the United States and European nations in the Middle East.

All major contractors for this project will be Chinese, and foreign companies will have difficulty stepping in and getting involved in the projects — except through approval processes decided by China. Most opportunities for outside company firms will be in sub-contracts and joint ventures, but right now foreign companies will have a very hard time identifying concrete business opportunities due to lack of data and Beijing not liking to overcommunicate in general. Also, for foreign businesses looking to take part in the projects, level of risk must be considered, and Chinese companies are often open to taking on risks that American and European companies cannot. However, many foreign companies — like General Electric, Siemens, Honeywell, Chubb, HSBC, etc. — were still able to be awarded contracts. American opportunities will mostly be in infrastructure development and helping them build this project and providing the equipment, as Kimberly Kirkendall, president of International Resource Development, Inc., explained, and other opportunities may exist in insurance, finance and technology.

Connections are very important for doing business with the Chinese. China doesn’t have a very transparent database on businesses opportunities and company credits, so the Chinese then tend to look toward their relationships to feel comfortable about the business decisions they make. This is also why brand and reputability are important. A common misconception is that bribery and other corrupt means are necessary to do business with the Chinese, and that is not true, as sometimes you just need to exchange favors without monetary transactions to move things forward.

Another interesting perspective to consider for finding business opportunities with this initiative is in Chinese import patterns. While securing exports is mainly based on geopolitical strategy, securing imports and eventually setting up manufacturing locales through new businesses will require partnerships. Aziz Ahmed, CEO of Indus International, gave the advice to first pinpoint what industries China exports in what countries they are from, and then reference your network to perhaps set up a trading post or manufacturing outlet in economic zones along the Belt and Road.

With lower costs of shipping and logistics time from China to other regions, China will become a platform for the world to reach several key markets, and this will be an advantage that every nation will attempt to leverage. The threat is that now those countries involved in this initiative will have lower shipping, freight and logistics costs from factory to market, so they are going to become more competitive than they ever have been.

In addition, many of the countries involved in the BRI are also new and emerging economic forces that will only see accelerated growth through this initiative. The Asia Development Bank estimates that projects in Asia will exceed $1.7 trillion per year through 2030; compare that to the United States, currently with $881 billion invested annually. As explained by James Herendeen, CEO at The Herendeen Group and global advisor for Global Chamber Bangkok, Southeast Asia and its emerging economies will be transformed into key trade centers, notably Bangkok, which will serve as a terminus point for the pan-Asia railway network. Furthermore, Central Asia, which has historically untapped economic potential, will also see drastic transformations in perhaps shifts toward industrialization or changes in pipeline distribution of its massive oil reserves. While Central Asian nations are wary of losing in trade agreements, they are still enthusiastic about this initiative, and Kimberly Millier, Ph.D., of JKM Business Consulting noted that Central Asian nations probably look at China more favorably than western nations due to past hostilities also regarding trade.

As China and participating countries promote free trade, the rest of the world experiences the dominoes of trade protectionism from western nations. It feels like current politics have reversed roles from the situation post-WWII. By placing itself at the forefront of international trade, China is looking to become the next greatest economic power and ideological influence on not just the Eastern Hemisphere but much of the world.

Annie Yang is a marketing intern at Global Chamber®.