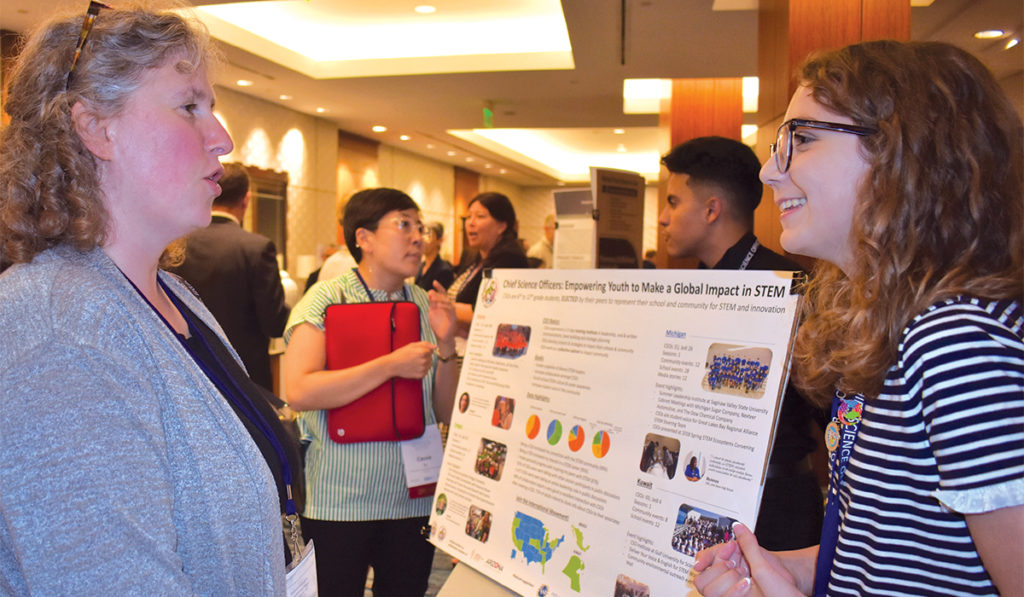 It’s not the norm.

When it comes to presentations at the Institute for Learning Innovative Technology Experiences for Students and Teachers conference, it’s not the supposed-to-be-the-adults learning — let alone even hearing — from children. But then again, participants in the Chief Science Officers (CSO) program do anything but follow the norm.

Recipients of National Science Foundation (NSF) grants are invited to talk about their programs at the annual conference staged by the STEM Learning and Research (STELAR) Center near NSF’s Alexandria, Va., headquarters. It’s rare to even mingle with others at the conference due to its immense size. At least, that was the experience last year of Jeremy Babendure, executive director of the Arizona Technology Council Foundation, which counts CSOs among its programs.

What a difference a year makes.

This time, the students staged their own panel workshop in addition to presenting during the poster session. They also appeared on panels of other grant recipients’ sessions. Babendure estimated at least three-fourths of all conference participants had interacted with the CSOs at some point. “I think [NSF was] looking for an opportunity to make this happen,” Babendure says. “And what better way than to leverage one of their funded programs to do that.”

NSF awarded the foundation and the Institute for Learning a $1 million research grant to evaluate the CSO program and the effectiveness of its K-12 and business/industry/community partnership model. “I think they recognize the importance of student voice,” Babendure says. “It helps to build our respective rapport with NSF because they can actually see us in action doing what we say we’re doing. We also increase our credibility with potentially getting additional grants.”

Also helping was the fact that two CSOs from Michigan joined the four from Arizona to make the presentations. NSF earlier awarded a supplemental $100,000 grant to extend evaluation of the program’s rollout to national and international regions. “We had been growing so quickly that when we got the [initial] grant, we hadn’t even projected we would have other states by now,” Babendure says.

For CSOs who go on trips such as this, they become more engaged and enthusiastic about the program because they see its potential. Says Babendure, “It’s a huge confidence booster for them and it rallies them.”

The same students also become part of the CSO Leadership Council, which means they are called upon to help with and co-facilitate sessions at events such as the annual Summer Institute, which was scheduled to be held in mid-July at Arizona State University. The Summer Institute offers students the chance to focus on creating action plans for their schools in the upcoming school year.

With ASU as the host this year, other university partners including The Biodesign Institute, Ira A. Fulton Schools of Engineering, College of Liberal Arts and Sciences, and the Department of Chemistry provide inspirational experiences to build the CSOs’ interest and excitement about science, Babendure says. Also, for the first time, the CSOs in Arizona are expected to get a taste of the international outreach as 20 students from Kuwait and another 15 from the Mexican state of Sonora were scheduled to attend the Summer Institute.