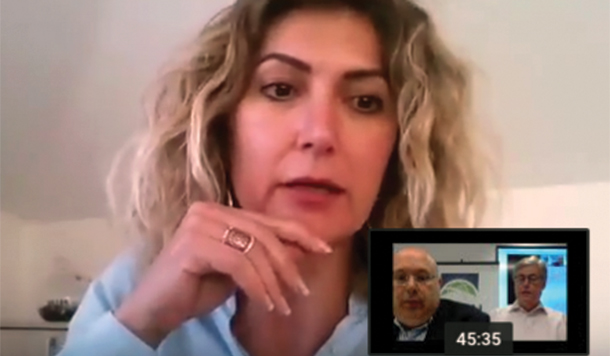 Progress toward gender equality varies in momentum around the world, and many nations still lack the social infrastructure and understanding for women to hold leadership roles. Despite facing backlash from their societies when choosing to pursue professional careers, many women have still managed to emerge as business leaders in countries with some of the widest gender gaps. In a recent event at Global Chamber®, female business leaders from Pakistan, Azerbaijan, Peru, Georgia and the United States shared their experiences in dealing with gender inequality in their striving for success.

In an engrained patriarchy, Pakistani women are often not free to make independent choices, and that means obtaining loans to start ventures or continuing education are decisions left to the male figureheads of their households. The women who gain support from their families in pursuing professional careers consider themselves extremely lucky, like Samrah Azam, who is the CEO of VIGO Business Consulting and executive director of Global Chamber Islamabad. Even with the support of her family, cultural complications still exist for Azam to make business negotiations by herself in the male-oriented business culture.

In Peru, very low percentages of women are entrepreneurs (4 percent) or hold high corporate positions (6 percent), with less than 20 percent having any leadership role within their companies. While stereotype pressure is without doubt a hindrance for women to emerge as business leaders, another barrier exists within women themselves, who too often yield their accomplishments or exhibit “imposter syndrome.” Cinthia Valera, CEO of the Family Business Association in Peru, experienced this psychological setback herself when faced with common biases against women. However, she believes that if women are aware of the system and also of their abilities, confidence can be gained and a lot can be changed about those low percentages because gender diversity really adds value to companies.

Problems that women face are parallel and similar around the world, especially those in education, financial opportunities, pay equality, childcare access and opportunities for balancing work and life, and, in the end everyone wants the same thing — equal opportunities and the ability to make choices.

“One statement that we need to be continuously making is that women’s rights and gender equality are not newly emerged sciences but provisions of basic human rights.”

This was a comment by Shafag Menraliyev, chief of Rector’s Office for ADA University, Azerbaijan. The first step to building societies where women can make choices surpassing the boundaries of their stereotypes is to lead by example. Your environment starts changing when you practice what you preach, and you are setting a new and better standard for future generations of women. Also, social media has become an influential battleground of public opinion, and never before has it been easier to lend support to and unite women.

Young women are frequently exposed to cultural biases that suggest women are inferior to men. In a personal story, Tamara Kalaniya, the chief financial and operating officer at the Middle East Institute, heard a remark from her daughter who thought her dad was smarter than her mom simply because of gender. That inspired Tamara to work even harder to professionally support and promote the women around her and also create an environment of female empowerment for her daughter.

Now her daughter has a different view: “Mom, you know, you are my role model and when I grow up, I’m gonna wear the pants in the family.”

The landscape for gender equality has seen significant change in the last 20 years, and the momentum on female empowerment is slowly transforming business leadership around the world.

Annie Yang is a marketing intern at Global Chamber®.