by Scottsdale Area Chamber of Commerce 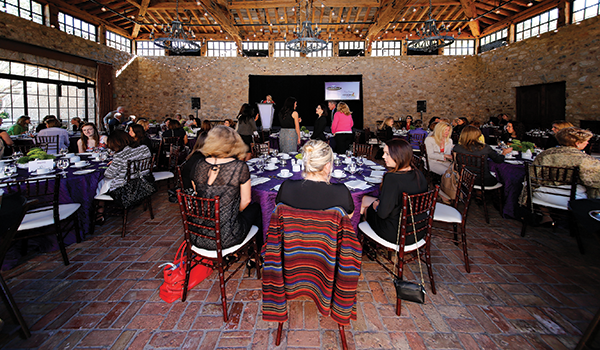 The 2015 Women in Leadership event took place Feb. 11
with a sold-out audience at the Silverleaf Club in Scottsdale. Photo: Sergio Dabdoub Photography

More than 120 attended the Third Annual Women in Leadership event, held Feb. 11, at the Silverleaf Club in Scottsdale.

Speaking to a sold-out audience, Flora Jessop described her childhood in Colorado City, Arizona, where she was raised in a polygamous family of two mothers and 27 siblings as part of the Fundamentalist Church of Jesus Christ of Latter Day Saints. When she was 16 years old, after years of sexual and physical abuse, she fled her family and faith.

Jessop moved to Phoenix, where she met her partner, Tim, and created a family unit with him and their daughters, Shauna and Megan.

In April 2001, Jessop’s younger sister Ruby was forced to marry her stepbrother, according to Jessop. This incident would be the catalyst that would propel Jessop into becoming an advocate against child abuse in the FLDS community.

Together with founder Linda Walker, Jessop helped to create the Child Protection Project. Today, she serves as the organization’s executive director.

The Child Protection Project is dedicated to raising awareness about institutionalized child abuse carried out by religious separatist groups, such as the Fundamental Church of Jesus Christ of Latter Day Saints. According to the organization’s website, “the violence and violations of these largely polygamist groups shape the lives of approximately 100,000 individuals in the American West.”

“I have been searching for her for 12 years and she was hidden from us,” Jessop told ABC News in January 2013 during a press conference. “Every time I got close to the community, they would pack her in a car and move her into hiding, ensuring that we couldn’t get close to her.”

“This year’s Women in Leadership event was both impressive and heartbreaking,” said Rick Kidder, president and CEO of the Scottsdale Area Chamber of Commerce. “That our citizens, despite religious conviction, should be robbed of the basic human decencies which we all enjoy is despicable and painful to hear. Ms. Jessop’s strength and forthright manner in helping women and children get away from abuse is an inspiration to us all.”

At the conclusion of the event, the Jessop sisters were on hand to answer questions and sign “Church of Lies,” a book Flora co-authored with writer and photographer Paul T. Brown.

“Plans are already underway for our 2016 Women in Leadership event,” said Anna Mineer, vice president of business development for the chamber. “We look forward to bringing another great speaker to the Valley that will continue our goal of helping women succeed in business and in life.”