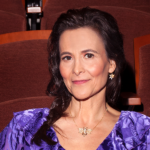 “It’s humbling to be recognized with so many creative, resourceful, tenacious women in our community. I’m grateful for the celebration of our work and our stories.”

Emmy® Award-winning ﬁlmmaker Kristin Atwell Ford has been trusted with our state’s most formative stories and tells them with the intent of making our community stronger.

Water is a subject that flows through Atwell’s work and touches all Arizonans. In 2010, the Salt River Project tapped Atwell to co-direct and write Theodore Roosevelt Dam: Arizona’s Living Legacy. The film celebrates the dam’s critical role in creating the water certainty needed to support our quality of life and the state’s $13.5 billion water economy. Narrated by actor Peter Coyote, the ﬁlm won the Rocky Mountain Emmy® Award for best historical documentary.

Atwell’s most recent water story is about Castle Hot Springs, a fabled spring on the ancestral lands of the Yavapai People that gave rise to Arizona’s first resort. Castle Hot Springs: Oasis of Time is the winner of the 2020 regional Emmy® Award. Atwell’s production partner is Quantum Leap Productions, a full-service script-to-screen video company that uses storytelling to make your brand noticed and remembered.

In perhaps her greatest community achievement to date, Atwell co-produced Arizona Opera’s triumphant world premiere of Riders of the Purple Sage, a new work by Craig Bohmler and Steven Mark Kohn based on Zane Grey’s dime novel masterpiece. A visionary driver of the project, Atwell expanded the world premiere to include fine art painter Ed Mell, Billie Jo and Judd Herberger, ASU Herberger Institute for Design and the Arts, National Park Service, and Scottsdale’s Museum of the West. Atwell documented the artistic process in the film, Riders of the Purple Sage: The Making of a Western Opera, which is nominated for four Emmy® Awards.

Atwell is currently directing a documentary about Liberty Wildlife, a local conservation engine dedicated to wildlife rehabilitation and education. Supported by the Rob and Melani Walton Family Foundation, the film will showcase how Liberty Wildlife’s Non-Eagle Feather Repository benefits wildlife and the cultural identity of Native Americans.

Born in Arizona, Atwell is the daughter of Sherri Chessen. Phoenicians will remember “Miss Sherri” as the local host of the children’s television show “Romper Room.” For 20 years, Atwell volunteered with The Rancho Feliz Charitable Foundation and documented how a small local charity raised more than $10 million to build a neighborhood, computer learning center and childcare facility in the impoverished border town of Agua Prieta, Mexico. Atwell sat on the boards of a KidsRead USA, a childhood literacy program, and Arizona Family Health Partnership. She is the proud recipient of the 2021 Governor’s Arts Awards as Arizona’s Artist of the Year.