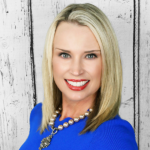 “Being recognized is truly an honor because it serves as an important reminder that women leaders can positively impact their communities and even the world.”

For more than 25 years, Kelly Zitlow has built her award-winning, highly respected career as a vice president and Certified Mortgage Planning Specialist® on earning the trust of her clients and partners by providing honest, well-communicated and knowledge-based lending experiences.

Zitlow’s unmatched level of personal service, commitment to education and client-centered approach has led her to receive top-level production awards for the last 17 consecutive years. She is ranked as one of the top 1% of loan officers nationally in both Scotsman Guide and National Mortgage News Magazine. In 2020, Zitlow helped more than 496 families achieve their home ownership goals, for an annual production that exceeded $151 million. She has also received the Five-Star Mortgage Professional Award (voted on by consumers) for the last five years in a row and has more than 400 five-star reviews online. Her success is second to the pride she feels for helping individuals in her community realize the dream of homeownership.

A professional mortgage industry speaker who has appeared in mortgage industry events across the nation, Zitlow is also a certified instructor with the Arizona Department of Real Estate and previously served on their Special Education Committee. She feels very passionate about education. Therefore, to help further educate her community and the nation, she has created two educational YouTube channels aimed at providing both real estate agents and consumers important, relevant information about the home-lending process. This has led her to receive two Video Influencer Awards from BombBomb. In addition, this exposure has led her to TV appearances such as being featured on “Designing Spaces” on Lifetime TV and as the previous Arizona host for “The American Dream” TV show in the Phoenix/Scottsdale Market airing on CBS Channel 5.

After losing her mother to cancer, in 2020 Zitlow launched Sunshine Warrior in honor of her mother. Sunshine Warrior is a community that comes together to share stories, lift others up, inspire and give hope on both sunny days and in life’s storms. Being a Sunshine Warrior represents a beacon of light during a storm, one who brings peace, love, inspiration and strength to the world. In addition to giving back through Sunshine Warrior, Zitlow enjoys involvement with other charitable organizations. Two of her favorites are Andre House, which supports our homeless population, and Giving Sole, a unique charity for foster children started by a 10-year-old boy named Gavin.