For business, government and consumers, the circular economy is more than recycling 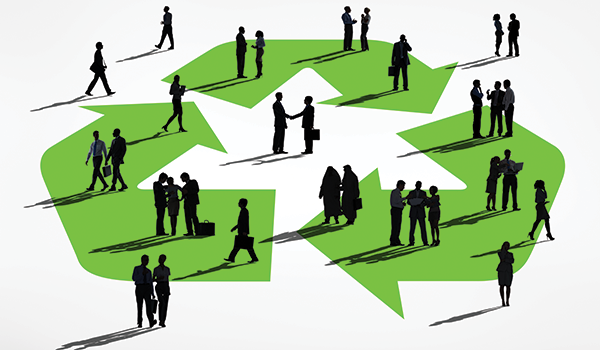 Waste Management’s tagline for the Waste Management Phoenix Open is “The Greenest Show on Grass,” and the details in the adjoining column give testament to its commitment to that goal. The company’s dedication to “green” also extends beyond its own operations, and it hosts a forum every year alongside the Open that “gives us a chance to investigate and think more deeply about all the issues and challenges in the whole world of sustainability,” says Michelle Grossman, managing principal of Waste Management’s Sustainability Services. “We welcome the opportunity to learn from our customers and allow our customers to share solutions and best practices.”

This year’s forum, the sixth annual Executive Sustainability Forum, drew nearly 300 corporate leaders from global companies; representatives from municipalities across the country; experts, innovators and influencers to discuss sustainability and the “circular economy.”

In his keynote address, Jim Fish, executive VP and chief financial officer with Waste Management, noted the importance of a life-cycle-thinking approach that considers recycling issues at each point in the chain and not just the product’s end-of-life. To that end, he said, “We work with our partners at every point in the chain, from the manufacturer to the end user/consumer.” Among the challenges are the dual hits of commodity prices being down while contamination is up (which results in a higher cost of processing), and the increasing popularity of flexible packaging to replace glass, paper boxes and other plastics but which cannot be recycled.

Recycling itself was the topic of the first panel discussion. John Tierney, author and The New York Times science writer, noted that, for many, recycling is inherently virtuous. However, although acknowledging that recycling can help lessen global warming by reducing carbon waste, he held that the actual impact has been exaggerated. Fellow panelist Adam Minter, author and columnist at Bloomberg, supported his observation that “we have always been recycling — because it’s economically efficient” with the examples of paper in 19th-century America being made with clothing from Great Britain and Paul Revere using recycled material to produce his silver tea sets. On the issue of landfills, Tierney held that space is becoming more valuable and governments can save money in that regard by recycling, but the labor costs of recycling are rising; his view is municipal governments such as New York City can find landfill space elsewhere. Minter noted landfill cost depends on its geographic location, and other liability costs include groundwater contamination. Minter also noted that there is general interest in recycling but it is important to educate consumers in order to reduce contamination in recycling, and also that there is extended producer responsibility regarding the choice of packaging materials.

Materials management was the subject of the second panel. Following are a few of the key points by participants:

“We host the Open to showcase a lot of what we can do,” says Michele Grossman, managing principal of Waste Management’s Sustainability Services. Operating the tournament as “zero waste” since 2013, Waste Management — which has the largest amount of landfills in North America and is the largest residential recycler in the world — combines efforts of reducing, reusing, recycling, composting, donating and turning waste to energy to keep out of landfills a full 100-percent of tournament waste.