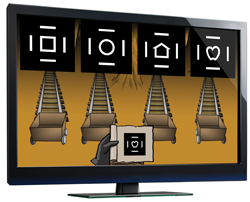 VisionQuest 20/20, built on a collaboration two Arizonans initiated in 2001, aims to transform the way eye tests are administered to school children and help prevent issues related to treatable vision problems.

It was the idea of James O’Neil, M.D., a pediatric ophthalmologist, to blend vision-evaluating technology into a video game to detect vision problems in a child, shooting the beam into the eye while the child is engrossed in playing the game. The impetus came from his frustration with having so frequently to tell parents their child had permanent vision loss from amblyopia, or lazy eye, which is entirely preventable if detected in time. Co-founder Richard Tirendi brought the enterprise his business acumen and expertise in methodical problem-solving as what he calls a “technical geek engineer” from the semi-conductor industry.

Believing the idea had value but that they could not do it alone, they chose to incorporate as a nonprofit to further opportunities for collaboration with other nonprofits, government agencies and for-profit entities that might otherwise see them as competitors. Among collaborators was the late Randy Pausch of Carnegie Mellon University, whose graphics the game employs.

Mesa-based VisionQuest launched the game EyeSpy 20/20 earlier this year, providing screenings at a cost of approximately $2 each, compared to $10–$15 per screening using the 150-year-old traditional eye chart. The game tests for visual acuity — including lazy eye, eye misalignment and cataracts — as well as analyzing binocular function, while eliminating the possibility that the child is peeking, guessing or reciting from memory. VisionQuest’s continued management of the data provides the school with data storage and retrieval so information can be compared throughout a child’s age progression. With computers readily available at most schools, equipment cost is usually not a factor.

To recoup the tremendous cost of developing and maintaining the technology, VisionQuest charges $3,800 for initial implementation. Recognizing the potential financial hurdle this might pose, Tirendi explains, they incorporated a targeted marketing opportunity on the report each child takes home to his or her parents, which the schools could offer businesses to help underwrite the program and even raise additional funds.

As a public health model, Tirendi believes VisionQuest 20/20 is unique in its combination of social good and entrepreneurialism. “Vision is integral to psychosocial performance, learning, behavior and a slew of other things,” he says. “This is a way to touch a child’s life in a way that is unprecedented.”