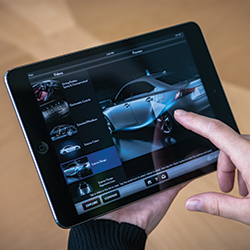 Leveraging the companies’ individual strengths, a collaboration among three Valley companies resulted in a training app for Lexus that the car manufacturer liked so much it released publicly on iTunes. And they delivered the app in six weeks — less than one-fifth the 40 hours Lexus had been told by others the project would take.

Automatik, a Tempe-based company that provides educational material to train automobile sales forces on new vehicles, laid out the plan for how the app would function. Phoenix-based Blade created the content, and Gilbert-based Dapper Gentlemen developed the program to run it.

Blade’s content creation is built on “augmented reality,” which co-owner Mark Trengove describes as a next generation of the QR barcode. Where, previously, flashing on a printed QR square would trigger an iPad to show additional information about the indicated item, augmented reality enables the iPad to “recognize the real-life thing” and bring up the model information or options when it is shown the actual item — from headlight to speedometer to trunk. “It recognizes the item when you point an iPad at it because we’ve taken so many photographs from so many angles,” Trengove explains.

Dapper Gentlemen added a gyro effect, giving the viewer a changing line of sight that creates the sense the viewer is moving with the car. With the success of the app, Lexus had Dapper Gentlemen create a website that works the same way.

Automatik’s intent was to provide Lexus with a training aid on its 2014 Lexus IS 350 for its sales force that would be fun and engaging, keeping them intrigued so they would learn more about the car. The final product is an app Lexus found piques the interest of people who are not willing to sit down and read a manual to find out what’s new on the car.

“Augmented reality will definitely be a thing of the future,” says Louise Parker, Trengove’s partner, relating their company has already wowed Disney with the program’s possibilities for Disney’s cruises and Automatik has successfully pitched it as a training tool in its market. And the app the three-way collaboration produced in record time has been recognized for its pioneering technology and won for Blade a Gold Addy Award from the 2014 Phoenix ADDY Awards.