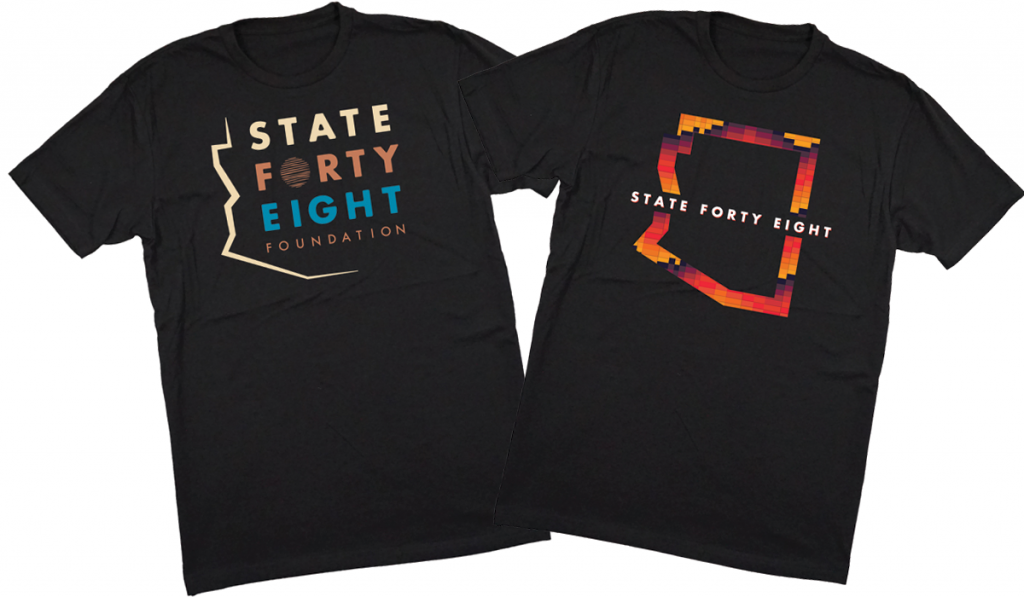 State Forty Eight is an Arizona apparel and lifestyle brand that is rooted in community. CEO Mike Spangenberg, who co-founded it with Nicholas Polando, describes it as more than just T-shirt company, committed to collaborating with local organizations in the form of unique T-shirt designs that help with raising awareness and even serve as a fundraising tool for charity organizations. With Polando as creative director, the company also offers screen printing and embroidery solutions as well as art and branding services.

“We launched State Forty Eight because we recognized a need for apparel that was both stylish and a way to represent Arizona,” Spangenberg explains. They applied to their endeavor advice they’d been given to think of the business as a solution to a problem: “What are you solving or what need are you fulfilling?” As natives in a state filled with transplants, Spangenberg says they were tired of people rooting for other teams or knocking Arizona down. “There is so much to love about where we live. Nick created a really cool Arizona-inspired design that we decided to put on a T-shirt and people really gravitated to it.”

Working as a partnership, Spangenberg and Polando figured out the company structure and defined their roles early on. “Once we were able to define our roles clearly, we had room to make the decision that allowed us to grow,” Spangenberg says.

As a startup, not having enough time and resources was the biggest challenge the company had to overcome, resulting in a lot of trial and error in the years before Spangenberg and Polando could focus on State Forty Eight full time. They met those challenges by never trying to do too much at once, reinvesting everything they made back into the company for the first few years and really focused on leveraging their network and building their community.

“Our company wouldn’t be here if it weren’t for the support of the community,” Spangenberg says. In 2019, six years after launching the company, they launched an initiative that focused on creating awareness and encouraging volunteerism for local charities. “It was then we realized that people wanted to take part in what we were doing. So, in 2020 we took another leap and launched a 501(c)3.”

Noting that it takes time to build something and it can be easy to get caught up in the day-to-day, Spangenberg believes it’s important to celebrate the small wins. And he adds, “I also can’t emphasize enough how important collaborations and relationships are when starting or growing a venture.”

The nonprofit they launched, State Forty Eight Foundation, is dedicated to fostering the entrepreneurial spirit in Arizona and activating the community through meaningful partnerships and volunteer-driven events, supporting Arizona’s startup culture through educational resources, networking and grant funding. The goal is not just to give back but to encourage others to do the same.