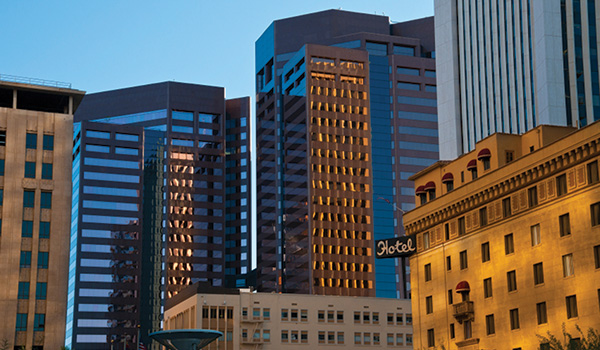 The rebound of the Phoenix-area commercial real estate market remains a long, dark night, with sunnier skies forecast over the next three years, according to Mark Stapp of Arizona State University’s W. P. Carey School of Business.

“The good news is that it appears the commercial market has reached its bottom and has stabilized,” says Stapp. “The bad news is we don’t know exactly how long a recovery will take. A lot of things need to shift for that to happen. We’re probably looking at 2014 or 2015.”

Andrew Cheney, principal/partner in the Coppola/Cheney Group at Lee & Associates Arizona, agrees that an extended Darwinistic trial is more likely than a quick fix. “Ten years ago, the Phoenix-area commercial market was recovering from a recession. Today, it is trying to recover from the Great Recession,” he says, though he remains hopeful that Arizona’s surge of job creations — launching it to seventh-fastest in the nation status — will aid in a quicker recovery. “When we have sustainable job growth, we will see considerable improvement in the commercial markets.”

By way of facts and figures, Phoenix-area commercial real estate — comprised of industrial and office space, retail, storefronts and apartment buildings — is in a holding pattern, at best, for now, which creates interesting challenges and opportunities in the marketplace. As office space vacancies hit above 27 percent — higher, even, than in the immediate aftermath of 9/11 — and industrial space vacancies hover around 12 percent, rental is at “rock bottom rates,” and may continue to decline in many locations. Stapp notes that a few submarkets — Southeast Valley, Downtown Phoenix — have made more recovery progress than surrounding areas.

Multi-tenant properties, conversely, are moving comparatively quickly on the market, primarily because Phoenix’s residential housing market has been so hard hit by foreclosures. Displaced homeowners — who “need to live somewhere, and usually fast,” says Stapp — are migrating to apartment buildings.

Such shifts in the area housing market critically impact the commercial market, according to Stapp. “Even if it looks as if the overall market is recovering, commercial is lagging — retail in particular,” he says. “The primary reason for that: With so many people negatively impacted by the overall economy and home foreclosures, there is a scarcity of disposable income. A lot of people are only spending the bare minimum on the bare essentials these days, and that is devastating to a large portion of the commercial market.” 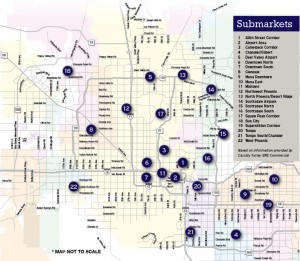 Stapp remains cautiously optimistic, as changing business models and spatial needs shift dramatically, particularly for retailers, many of whom are downsizing or moving from traditional storefronts or big boxes to order fulfillment warehouses. “Investors need to really know the market today before making a move, and the market has a lot of moving parts today. What’s going on socio-economically, what’s going on demographically, what’s going on with location, with competing businesses, with public policy in general — all of these things affect the quality of your investment,” says Stapp.

The good news for savvy investors with solid credit and financial wherewithal to hold properties for the long term is that commercial prices in today’s market are highly accessible, and ample loan monies are available to qualified buyers. “I have lenders literally calling me now trying to place money,” says Kent Hanson of the Industrial Group for Cassidy Turley. “Prices are almost at all-time lows; interest rates are incredible; and there’s a good amount of nice, available properties. The time is great to buy.”

Lee & Associate’s Cheney agrees, noting that “the large majority” of the 300-plus office condos developed and sold in the area since 2002 “went back to the lender when the market collapsed,” and many are available now at deeply discounted prices. “For buyers, there will continue to be outstanding opportunities to lock in low real estate costs,” says Cheney.

Stapp says that this is clearly a buyer’s market, but warns that investments must be carefully considered and held over a long-term. “This is not a ‘flip it’ market. Opportunity does exist in this market, but it has to be carefully vetted with an eye toward the changes that are occurring — political, technological, socio-economic, demographic — and how they impact the market,” he says. “If you’re able to buy and hold onto portfolio elements over a longer period of time, this is a workable market, and multi-tenant properties still look like your best investment. People will always need a place to live.”