Different trends are at play in the various commercial sectors 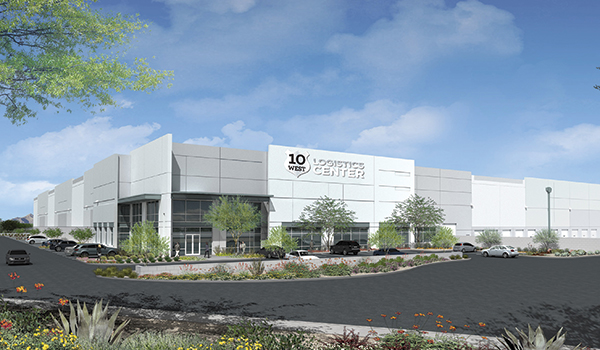 A new, 80-acre, master-planned bulk-distribution park expected to break ground this year, 10 West Logistics Center, is being devleoped by Wentworth Property Company at 59th Avenue and Van Buren and will consist of more than 1.3 million square feet of space

In the office market, Metro Phoenix led the nation with a 3.9-percent increase in asking rents from the end of 2013 to the end of the first quarter of 2014. This has occurred while vacancy rates have remained flat, says Craig Henig, senior managing director of the CBRE Phoenix office. The reason? “Large blocks of space are in short supply,” he says. There is both speculative and build-to-suit activity. Spec is being led by the Allred Corporation, building a 1.3-million-square-foot distribution center on Chandler’s Price Road Corridor. Naming the GoDaddy project as the largest build-to-suit and two for Wells Fargo as also among the largest of the office projects, Henig says an influx of technology and finance companies has resulted in increased leasing and construction in the Southeast Valley.

Tyler Wilson, vice president of the Office Services Group in Cassidy Turley’s Phoenix office, predicts Chandler, Tempe and Central/South Scottsdale will be the most active submarkets. “The South Loop 101 has seen the greatest focus of activity. We are seeing lots of interest in projects such as the Discovery Business Center, ASU Research Park and then properties all along the Price Road Corridor. In Chandler, the most active product type is back office and call center. In Tempe, it is headquarter spaces and back office. Scottsdale is mostly seeing ‘creative’ requirements, Millennial requirements and technology.”

Space requirements are changing due to a change in the way people work. Says Henig, “More companies are looking at the way employees collaborate together, wellness and efficiency. So companies gravitate toward more of a collaborative, creative work environment.” As they move away from a lot of private offices, and go paperless and therefore have less call for file cabinets, tenants don’t need as much space as they used to. Another trend impacting the office market, Wilson observes, is the growing importance of area amenities as a factor in location decisions as companies consider employee attraction and retention issues.

Retail is likely to see little to no new construction, according to Cliff Johnston, managing director of Cassidy Turley’s Retail Services Group in Phoenix. “The abundance of vacant space and below-market rental rates will keep new construction at a relative halt until these factors are more in line with a typical, healthy retail market,” he says.

However, Henig notes there was 1.6 million square feet of absorption in 2013, compared to negative absorption in 2009, ’10 and ’11. He sees an increase in adaptive reuse around the Valley as office space is converted to smaller retail centers or multifamily. And retailers are adapting to a different footprint, he observes, crediting the change to the impact of e-commerce. “Retailers are more pragmatic in the way they lay out the stores and the product they’re carrying,” he says, explaining they will take a smaller space because they are flooring less product as in-store purchasing patterns change.

Another change Henig points to is retail not “following the rooftops” as it used to do, but rather trending to urban and infill sites. Johnston notes retail product attracting the most interest at this time is high-visibility, multi-tenant buildings fronting major thoroughfares. “These buildings provide for end-cap location with prominent signage directly to traffic and usually can accommodate outdoor patios for restaurants,” Johnston says, adding, “Fast-casual restaurants in the 1,800- to 3,000-square-foot size range are currently the most active retail tenants.”

In the industrial sector, Metro Phoenix — as is true across the country — has seen a tightening of supply, “especially in highly competitive, big-box markets,” Henig says. This has led to increased construction of build-to-suit, especially among larger users, and speculative projects. The largest spec projects are Trammell Crow’s 618,000-square-foot industrial park around the Chandler Airport, scheduled to break ground this summer, and Hillwood Investment Properties’ 1.3-million-square-foot distribution center on Phoenix’s west side, now in Phase I and scheduled for full completion by the end of this year.

“The Sky Harbor Airport/Southeast Valley has been extremely active and will continue to see user demand looking for educated and skilled labor,” says Will Strong, vice president of the Industrial Services Group in Cassidy Turley’s Phoenix office, adding the demand also encompasses access to the metropolitan area’s major freeway systems as well as higher office finish.

Of the Southwest Valley, Strong says activity has been somewhat quiet but he sees signs that there will be major users who will absorb some larger chunks of vacancy. “This is a user set focused on bulk-distribution buildings, needing access to Phoenix but who will also utilize the close geography to other major cities and the ability to be there in one day or less.” Much of the activity, he says, will involve businesses “wanting to compete with the major players with an existing e-commerce presence or who have been traditional retailers but are moving toward online distribution.” Bulk-distribution buildings with a large footprint cater to these tenants, he says. Another hot product is higher-finish flex projects with a heavy parking ratio, which, he says, have been pre-leasing before construction completes. “This is a growing trend of tenants tapping into the abundance of skilled labor in Phoenix but needing building with heavier office, flexible infrastructure and parking to accommodate.”

And spanning all sectors is a stretch of proposed development in the West Valley. “All sectors are watching the 303 Corridor,” says Henig.