The Media Mileage of Corporate Philanthropy

Companies adopt different styles of giving to promote their goals 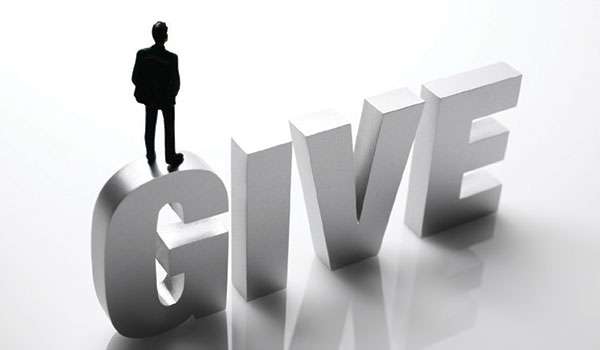 Though the economy continues to endure the deeper valleys of a rollercoaster half-decade, with employment rates still sagging, real estate sales only beginning to regain a pulse and consumer spending remaining stagnant, many Arizona small businesses and corporations are nevertheless embracing philanthropic opportunities as a means of staying connected to their communities while boosting morale and team spirit within their offices.

Relying on recent studies that show consumers draw not only to a company’s product but its values, too, several Arizona companies and businesspeople are do-gooding in significant ways through a combination of cash and goods donations, volunteerism, scholarship programs and contest initiatives. Not only does this spirit giving boost a company’s positive standing in the community, but it fosters a corporate culture of teamwork and good spirits. Corporate philanthropy, then, is good for the business, inside and outside the cubicle.

Since 1946, Target has given five percent of its income — more than $3 million a week, on average — to the communities it serves, according to Egan. In the Phoenix area, this includes recent total makeovers of three elementary school libraries, the gifting of more than 50 field trips, arts and early childhood reading grants, and more. Target has also worked closely with the Children’s Museum, even prior to its June 2008 opening, sponsoring free admission for children and families on the first Friday of every month and playing an active role on the museum’s board of directors. “It’s an ongoing opportunity for Target to give back to the community,” says Egan, “and to make valuable connections with local children and families.”

Debbie Gilpin, president and CEO of the Children’s Museum — which benefits from the charitable contributions of more than a dozen area businesses, including United Healthcare, Delta Dental of Arizona Foundation, Shamrock Farms, Emerson Network Power, Waste Management, SRP , CVS , Borders and Ford — says the 30 million Americans who annually visit one of the nation’s 300 children’s museums appreciate the corporations that make their very existence possible. The Children’s Museum prominently features the logos of sponsoring companies on many of its banners, brochures and other promotional literature, while many companies also enjoy the spoils of positive media coverage in response to their philanthropic endeavors.

But the benefit of donations, volunteering and sponsorship isn’t only in elevated profile or the possibility of bigger sales for a company; it’s an investment in a community’s very future, Gilpin says. “Companies recognize that the success of children in their learning, social skills, health and personal development is directly correlated to how successful our community will be, and what type of workforce they will have in the future,” Gilpin

When Pyxl, a digital marketing firm, expanded to open a Tempe office, general manager Eric Rutin knew the company’s fortune would be directly tied to its connection with the community. “We’ve always been a company that believes in giving back to the community,” says Rutin, who launched a contest for local charities, the winner of which would receive “an enterprise-quality” digital makeover and Web redesign, valued at $50,000. The contest allowed the community to vote via social media for its favorite of 14 nominated charities, with the winner — Free Arts for Abused Children of Arizona — garnering 14,000 votes. The new Free Arts website, from a design team led by Pyxl senior designer Dereck Bermudez, will debut online this summer.

“In addition to being a labor of love and supporting a truly great charitable organization, our donation provides an excellent referral base to build our awareness and grow our business,” says Rutin. “[The contest] made a lot of sense from a business standpoint by injecting visibility of Pyxl’s capabilities to many of Phoenix’s most influential leaders.”

For seven years, Adam Goodman, president and CEO of the third-generation, famil-yowned Goodmans Interior Structures, an office furniture dealer, has run the Good Eye for the Good Guys contest, which provides five-figure office makeovers for an area nonprofit organization. Goodmans recently completed work on a $20,000 office remodel for CHEEERS (Center for Health Empowerment Education Employment Recovery Services), which nurtures adults with behavioral health challenges to achieve their goals and dreams, moved not only by the organization’s mission and the leadership of its CEO Mitchell Klein, but with a full awareness that the limited resources of many nonprofits does not afford functional, let alone comfortable, working spaces. Goodman believes the contest engages the public at large in a manner a single, inhouse choice would not, inviting participants an entry not only to Goodmans’ own philanthropic efforts, but to a wide range of valuable, but often unsung nonprofit organizations, catalysts of positive change within a community.

“The vision of Goodmans is to change the community,” says Goodman. “Good Guy promotes greater teamwork while bringing about social change and inspiring others to join with us to find ways to impact the community. That’s good for everyone.”

Robyn Barrett, founder of FSW Funding, a leading factoring firm offering flexible and affordable lines of credit for small and midsize businesses, is even more precise in her giving, honoring individual student entrepreneurs with an Arizona State University scholarship she launched three years ago. “The scholarship was established to encourage young people to explore the possibilities of being an entrepreneur, which is the backbone of America, and I did it at ASU because my educational experience there helped me become the businessperson I am today,” says Barrett, who enjoys a modest amount of positive local and regional press surrounding the contest. Giving, she says, is a way of thanking a community for its business, which often creates more business, which allows for more giving, which strengthens the community overall.

Executives at Chipotle and United Healthcare Employer & Individual of Arizona, both deeply committed to community giving in all varieties, concur: Giving is not only right and good, but it’s good for business, too. “By investing in the communities where we live, work, and play, we help create a more active and vibrant community and workforce,” says Jeri Jones, president and CEO of United Healthcare, which provided a $150,000 grant to the Children’s Museum. “Strong corporate philanthropy improves our relationship with the people we serve, and that’s a good thing for every one of us.”