How to Say It Right the First Time, Every Time 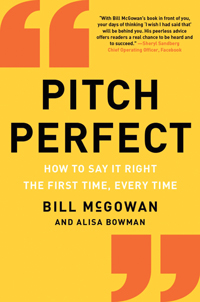 Media coach and Emmy Award-winning correspondent Bill McGowan shares his secrets of pitch-perfect communications, showing readers how to communicate with confidence. Saying the right thing the right way can make the difference between sealing the deal or losing the account, advancing one’s career or suffering a demotion. McGowan shows how to craft just the right message. Along the way, McGowan lays out his Seven Principles of Persuasion, including the Scorsese Principle (hold the audience’s attention with visual images and direct the film that plays in the listener’s mind) and the No-Tailgating Principle (avoid verbal fender-benders and career-wrecking moments by maintaining a safe talking distance).