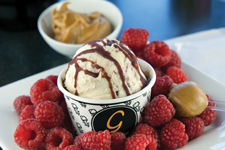 Gelato Spot’s current marketing campaign combines cross-promotion within the restaurant realm of small business with support of community nonprofit Phoenix Children’s Hospital. Through the summer, Gelato Spot is hosting a flavor competition among chefs at noted local restaurants, who have created his and her own flavor, and funds raised will be donated to the hospital in the name of the winning chef. Pictures of the participating chefs, along with the name of their restaurants, are prominently posted in the Gelato Spot stores, and the chefs will be serving their flavor and promoting the competition at their own establishments. Voting options capture the diverse buying and social networking habits of different demographics — from in-store purchase to texting.

“I know gelato; they know ingredients and how to [layer them] to bring flavors out,” says Tommy Plato, a principal in the family-owned business. Working with them for a month of R&D, he shared his knowledge of the science of gelato — characteristics of different sugars and fat contents and how to balance the recipes to have the same freezing points — while they experimented with “tons of batches and different flavors.” Plato credits the chefs for their commitment to helping raise awareness of the fundraiser. He provides the gelato base, which he has developed to be flexible about the freezing point, and the chefs contribute their own ingredients, which he says are all high-quality. “The chefs are very competitive; their attitude is, ‘I don’t care how much it costs, I just want it to taste amazing.’”