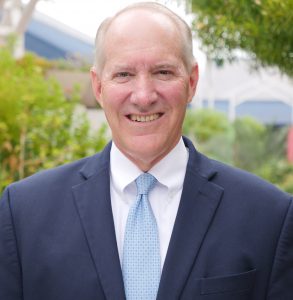 Zabilski has led the local Society of St. Vincent de Paul for the past 25 years. Zabilski will succeed Piper Trust President and CEO Mary Jane Rynd, who will retire but will continue to serve the Trust on its Audit and Investment Committees at the Board’s request. Rynd joined Piper Trust in 2001 as its first CFO and then Executive Vice President; she became President and CEO in June 2018.

Zabilski, the long-time leader of The Society of St. Vincent de Paul, has made an enduring mark in this community due to his years of business experience and ability to serve with compassion and dignity. He helped to greatly advance the mission and services of St. Vincent de Paul including doubling its health clinic space to provide treatment for more people, operating dining rooms that provide meals 365 days a year, and establishing a transitional shelter and resource center. Before his career at St. Vincent de Paul, he was a Senior Vice President with Transamerica Insurance Group and an audit manager of KPMG Peat Marwick.

“When Mary Jane shared her retirement plans, Trustees discussed the character and experience that would be needed by her successor—someone like Mary Jane, who would lead with the right temperament to direct and motivate the staff, have a deep understanding of and care for this community, and carry on the directive and mission of the Trust’s founder, Virginia Piper,” said James D. Bruner, Trustee of Virginia G. Piper Charitable Trust, speaking on behalf of the Board. “After much deliberation, we [Trustees] looked down at the end of the table and realized that just the right person was sitting with us—Steve Zabilski,” said Bruner.

“It has been a great blessing to serve as a Trustee of Piper Trust for the past 17 years, and now, I am truly humbled to accept this new role for the Trust,” said Steve Zabilski, incoming President and CEO of Virginia G. Piper Charitable Trust. “As I am coming from an organization that has been a recipient of the Trust’s generosity, I feel I can add insight about what it is like to be a grantee and partner, and I am honored to further advance the Trust’s efforts underway that the Trust’s previous CEOs have led.”

President and CEO Mary Jane Rynd said, “Steve is the natural fit to take the helm of the Trust at this critical time in our world’s history. His experience and true servant leadership will be transformative for the Trust and Maricopa County. I am so proud of all we have accomplished during my leadership of Piper Trust, and especially during the recent trying times due to the pandemic and serious social unrest. Steve will bring new perspective and energy to the Trust’s mission.”

Before joining the Trust, Rynd was a partner at KPMG, and a founding partner at Rynd, Carneal & Ewing. She also worked with Virginia Galvin Piper, serving as her tax advisor, and helping her establish a charitable legacy.

“Mary Jane has been involved in every significant decision of the Trust, even prior to her appointment as President and CEO, and Trustees are totally indebted to her for her leadership and strong stewardship of the Trust. As continuity is principle to the Trust’s operation, we are honored that Mr. Zabilski agreed to accept this offer from the Trustees. The Trust and the community will be well served by his leadership,” added Bruner.

In line with the Trust’s dedication to strengthening its future and building its next generation of leadership, Trustees also felt the time was right to expand the Board, and they are thrilled to welcome the three new Trustees, Lori Higuera, Paul Mulligan, and Ed Zuercher, effective September 1, 2022.

Laura Grafman, a Trustee and long-time close friend of Virginia Piper, recalled, “I had the great good fortune to see firsthand Virginia’s deep commitment to our community and to her philanthropy. As we all read with great excitement today about the new talent joining the Trust and the Board, it is clear to see Virginia’s values. Humility, compassion, and gratitude are reflected in incoming President and CEO, Steve Zabilski, as well as in the three new Trustees, Lori Higuera, Paul Mulligan, and Ed Zuercher. I believe Virginia would be so proud of these appointments, and of this moment.”