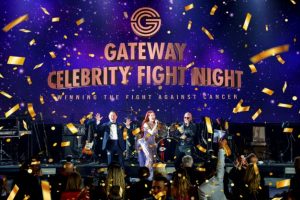 Gateway for Cancer Research, an internationally recognized philanthropic organization that has generated more than $90 million in charitable funding throughout its 27-year history, raised more than $5 million at its inaugural Gateway Celebrity Fight Night, the result of a merger between Gateway and Celebrity Fight Night in 2021. This year’s event featured a “Stardust Dreams” theme and was held on Saturday, March 12 at the JW Marriott Resort and Spa Desert Ridge in Phoenix, Arizona.

“After two years away, the Gateway team hoped to reinvigorate and reinvent Celebrity Fight Night with a renewed purpose and sharpened fundraising focus, but we’re absolutely thrilled that tonight was so well-received, and, more importantly, so successful in raising funds for the organization,” said Dr. Stacie J. Stephenson, Vice-Chair at Gateway for Cancer Research and Gateway Celebrity Fight Night. “Nearly everyone is eventually touched by cancer, either personally or through loved ones, and it’s our goal—with the support of Celebrity Fight Night and their amazing team­–to ensure that every patient and family member gets the support they need until the day that we no longer fear a cancer diagnosis.”

Gateway for Cancer Research is a nonprofit 501(c)(3) organization committed to funding practice-changing clinical research and to ending cancer as we know it. Thanks to generous underwriting from the Stephenson Family, 99 cents of every dollar Gateway receives directly funds Phase I and Phase II cancer clinical trials. Gateway supports clinical studies at high risk of going unfunded, saving potentially life-saving research from the so-called “valley of death.”

“I founded Gateway for Cancer Research for personal reasons, after my mother died unnecessarily after being denied the kind of life-saving treatment that this foundation prioritizes,” said Founder Richard J Stephenson. “But what I realized was that my personal story wasn’t unique. There are so many of us in the ‘cancer club,’ but to paraphrase Yogi Berra, it’s a club I’d rather not be a part of. That’s why events like this are so important. By humanizing our own battles, our own fights, we all become stronger.”

The black-tie event featured a cocktail reception, silent auction, elegant dinner and exciting live auction including one-of-a-kind luxury items. The live auction featured an intimate dinner with Reba McEntire, a Tito’s 25th Anniversary VIP Experience in Austin, an exclusive dinner in New York City with Billy Crystal, Steve Martin, and Martin Short, and more. In addition, actor and television host Cameron Mathison served as this year’s Guest of Honor, receiving the inaugural Mary Brown Stephenson Award, named for Richard Stephenson’s mother and given to honor individuals who have survived cancer and have used that experience in support of public advocacy or philanthropy.

Gateway for Cancer Research℠ is a nonprofit 501c(3) organization committed to funding innovative cancer research that helps people living with cancer to feel better and live longer as we work to end cancer as we know it. Thanks to generous underwriting, 99 cents of every dollar Gateway receives directly funds Phase I and Phase II cancer clinical trials at leading research institutions across the country and abroad. Since 1991, Gateway has supported more than 190 clinical trials and funded over $90 million in breakthrough cancer research, serving over 9,000 patients.