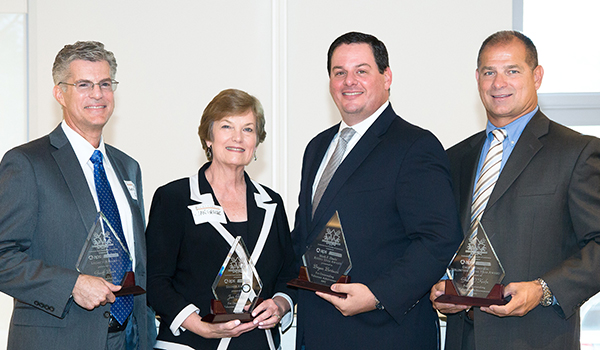 The Scottsdale Area Chamber of Commerce celebrated its 2015 Business Volunteer Awards on June 10, at Venue 8600 in Scottsdale.

Organizations like the Scottsdale Area Chamber rely on its members as much as its staff to become and remain successful. The Business Volunteer Awards were created to honor those members who have gone above and beyond in their service to the organization, other members and the community.

“Scottsdale has a unique spirit of volunteerism and a passion for economic success,” said Rick Kidder, president and CEO of the Scottsdale Area Chamber.

The Legacy Award honors a Scottsdale Area Chamber member who has risen above the call of duty for a significant number years, contributing not only to the chamber but to the community at large.

Geoff Beer, a real estate developer with Crescent Bay Holdings, was a key leader in the development and revitalization of the Scottsdale waterfront along the canal. He was singled out for his many years of dedication to the Scottsdale community. While many real estate developers are invested in their local communities only during their projects, Beer remained a steady and present voice in Scottsdale long after his projects were finished.

“He hasn’t moved on, but stayed and became involved, even serving the chamber’s board treasurer,” said Kidder.

The Segner Award, named after the chamber’s first board chair, Wesley Segner, honors contributions to and impacts on the chamber’s success.

As president of Scottsdale Community College, Jan Gehler has been instrumental in community stewardship throughout the city.

“We have a strategic goal to partner with the community,” said Gehler as she accepted her award.

The Mark F. Eberle Rising Star Award recognizes an individual for his or her volunteer spirit and leadership promise.

Bryan Bertucci, a financial advisor with Raymond James, serves the chamber as the chair of its Ambassador Committee. A tireless supporter and advocate for the chamber, he attends a majority of the chamber’s events, including AM Connect networking functions and ribbon cuttings.

“He also shows up for every Know Your Chamber new member orientation, and his presentation is always highly rated by attendees as their favorite part of the program,” said Kidder.

Dale B. Fingersh Volunteer of Year Award honors an outstanding volunteer for his or her dedication, commitment and service to the chamber.

The Chair’s Award is a special award given solely at the discretion of the chamber’s board chair. It is awarded only if the chair feels there is a person who particularly deserves it because of his or her significant contributions to the chamber.

Larson, a director at AVB Development Partners, has played a pivotal role at the Scottsdale Area Chamber for many years. He has chaired most of the chamber’s executive committees, and served as chair of the board of directors.

“During the recession, Eric temporarily stepped down from his role as board chair to assist the chamber doing sponsorship sales — in short, he did whatever needed to be done to support the chamber during difficult times,” said Kidder.