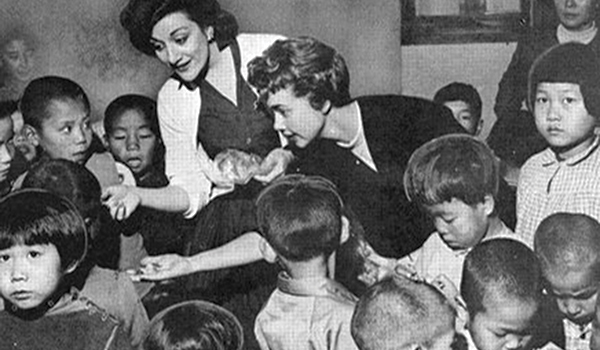 On February 12, the Scottsdale Area Chamber of Commerce hosted a signature event, the second annual Women In Leadership luncheon at Silverleaf Club. The sell-out crowd was treated to the remarkable and inspiring story of two of Scottsdale’s brightest stars, Sara O’Meara and Yvonne Fedderson, the founders of Childhelp USA, one of America’s premier nonprofits dedicated to the health, safety and well-being of children.

As these two dedicated leaders told their story and offered their advice about making a difference, there was not a dry eye in the room. The following is the history of Childhelp USA from its official website, and of these remarkable women who have dedicated their lives and their resources to saving the lives of children.

Our community and our nation are lucky to have Sarah and Yvonne! 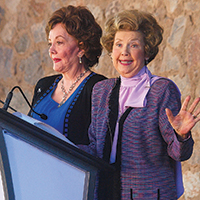 The Beginning of a Lifetime Commitment to Children…

Eleven half-American, half-Japanese orphans wandering homeless in Tokyo following a typhoon sparked a mission that has spanned internationally for nearly 55 years and impacted the lives of millions of children.

Hollywood actresses Sara Buckner (O’Meara) and Yvonne Lime (Fedderson) first met on the set of The Adventures of Ozzie & Harriet, when they played the girlfriends of Ricky and David Nelson. Their mission for children began in 1959 when they were sent on a government-sponsored goodwill tour to visit troops in Japan.

On the streets of Tokyo after a typhoon, the actresses came upon a group of cold and frightened children huddled together for warmth. Learning they had no parents and were born from American troops during the Korean War, the young women took the children to their hotel room for the night with the idea of placing them into an orphanage the next day.

What they didn’t know then was that this was the beginning of a lifetime commitment to children.

They learned the youngsters had been turned away from orphanages because of their mixed heritage. They were told of a woman, Kin Horuchi, living in a one-room hut who kept several Japanese-American children.

She agreed to care for the 11 additional children and the ladies promised to send money to help the children. They thought the problem was settled, but word of what they were doing spread rapidly through the city. They suddenly became surrogate mothers to a brood of 100 Japanese-American children who were left on the doorstep of the hut, which now needed to become an orphanage.

Returning to California, the actresses began to raise funds among friends and their families, as well as the film community, to care for the children. From that beginning grew International Orphans Incorporated, an organization that eventually built four orphanages, caring for thousands of abandoned Japanese-American children.

In 1966, the actresses were invited to Washington to discuss the building of orphanages for Vietnamese-American children. With the help of the Third Marine Amphibious Force, they established five orphanages, a hospital and a school for abandoned children in Vietnam. International Orphans Incorporated maintained the facilities until the American troops pulled out. In 1975, the two young women helped arrange Operation Baby Lift, flying thousands of children to waiting adoptive homes in America.

It was after a speech they made on International Orphans Incorporated that Nancy Reagan, then First Lady of California, asked that they turn their attention to “America’s best kept secret” — child abuse.

The Senate Subcommittee on Children and Youth had just released a study that child abuse had become epidemic in the United States and was the leading cause of death in young children. With encouragement of childcare experts in private and public sectors, International Orphans Incorporated began a campaign about child abuse, producing and airing the first television special on child abuse in America, and, in 1976, changed its name to Children’s Village USA. They began a program in the United States for abused and neglected children and called it a “village.” This was only the beginning of a life-long mission to help children in need.

Today, Sara O’Meara and Yvonne Fedderson continue to actively lead the organization as Chairman/CEO and President, respectively. The organization’s hotline, residential treatment centers and advocacy centers are studied by professionals from around the world as examples of “best practices” related to child abuse investigation and treatment methods.