You are here: Home / Marketing / #ChallengesforChange
Marketing  |  Nonprofit  |  May 2022 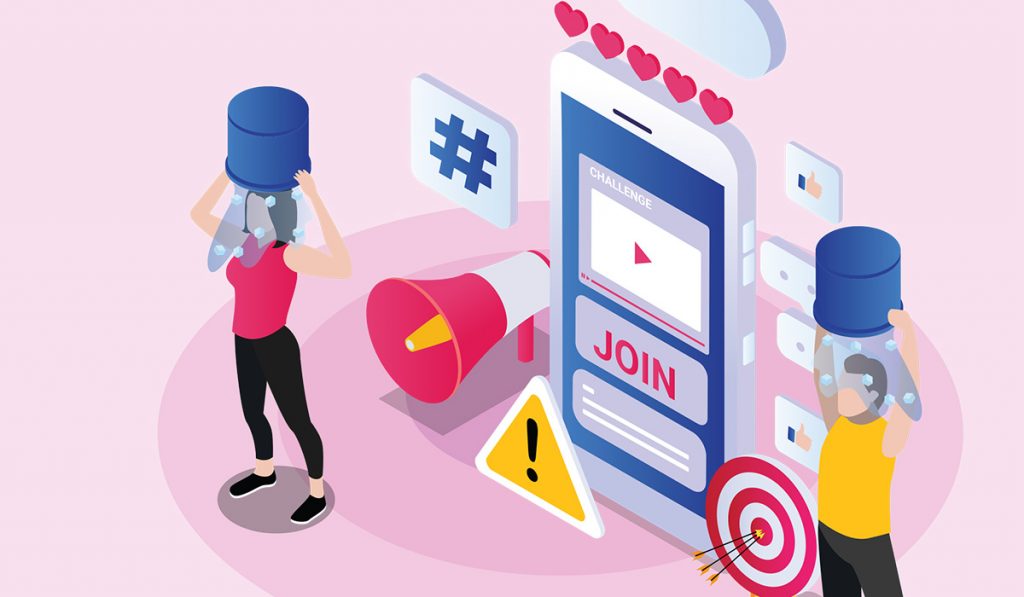 Social media is an indispensable tool for many businesses and organizations, including nonprofits. Whether a company is using Instagram, Facebook, TikTok, Twitter or LinkedIn, the platforms offer a free way to connect with their target audience. Every post is a new chance to reach a potential donor or volunteer.

Social media challenges and viral fundraising techniques can be huge for raising funds. When successful, these campaigns can bring widespread attention, major traffic to an organization’s website, and a spike in donations. All of which can be done without spending money on paid campaigns. One of the latest examples of this phenomenon is the Betty White Challenge.

The Viral Betty White Challenge was created in honor of the late Betty White. The beloved actress, best known for her role in “Golden Girls,” passed away in 2021 at the age of 99. In the wake of her death, the #bettywhitechallenge quickly surfaced online. It asked fans to donate $5 to an animal shelter or rescue of their choosing in White’s name. The challenge took place on January 17th, in honor of White’s 100th birthday.

The actress was a longtime advocate for animal welfare. White served on the board of trustees with the Los Angeles Zoo Association. She also received many awards, including American Humane’s National Humanitarian Medal and the Jane Goodall Institute Award for Lifetime Achievement.

The Betty White Challenge quickly went viral on social media. Millions of dollars were raised for animal welfare organizations across the country. Facebook announced that 390,000 users on its platforms alone raised more than $12 million. The Los Angeles Zoo, which is closely connected to White, reported more than $90,000 in donations. Even small, locally run shelters reported bringing in thousands of dollars from online donors.

The Betty White Challenge was successful for several reasons, including accessibility, flexibility and urgency. The barrier of entry was $5, which is accessible for most social media users. Users also didn’t have to donate their money to an organization they were unfamiliar with. The challenge offered flexibility, targeting a cause rather than one specific organization. People were able to choose exactly where their money went. It also created a sense of urgency. People were asked to donate on White’s 100th birthday.

The challenge created a sense of unity. Everyone was working together for a common goal: raising money for animals.

Going Viral Is Like Capturing Lightning in a Bottle

There is no guarantee it will happen, but there are ways to give an organization a greater chance. It all starts with great, shareable content.

When creating content, organizations should focus on storytelling. Users respond to content that has an emotional, human component. Nonprofits have a big advantage here. Most of the work is centered on helping people and the surrounding community. Organizations should tell their stories through great photos and videos. Social media users are more likely to interact with a post when it includes a person’s face.

Organizations should also make sure their message is clear and sharable. When coming up with an idea, they should consider how they would explain it to a friend. Is it easy to understand? Can someone share it easily with others? Answering those questions will help when developing a potentially viral campaign.

Messaging should respond to current events. Fundraising website Classy reports that 55% of people donate to new causes based on a timely appeal. People are more likely to give in response to something happening in the news or a special event in their community. Social channels are the fastest way to react to what is happening around us.

Lastly, it helps to think small. This might sound strange, but keeping the ask small will increase the number of people who can take part. The Betty White Challenge did this and saw enormous success. By asking for $5 instead of $100, the challenge was able to cast a wider net of donors. This is a great way to make philanthropy accessible for everyone. More people will be able to participate and feel involved in their community.

When raising money for any cause, it is important to understand why people want to donate. Classy’s “Why America Gives” report breaks down how to target key donors, how the pandemic impacted giving in our country and ways to engage donors through tech.
learn.classy.org/why-america-gives-2021.html

Taylor Fareri is the content manager for Valley of the Sun United Way, which serves more than 4.3 million people in Maricopa County. VSUW is committed to creating an equitable, inclusive community for everyone.

Did You Know: Challenges aren’t new. The ALS Ice Bucket Challenge that hit social media in 2014 was one of the first times a nonprofit went viral. The challenge asked people to film themselves dumping ice water on their heads, post it online and invite others to join in. In just 30 days, more than 15 million videos were made, raising more than $100 million for the ALS Association.