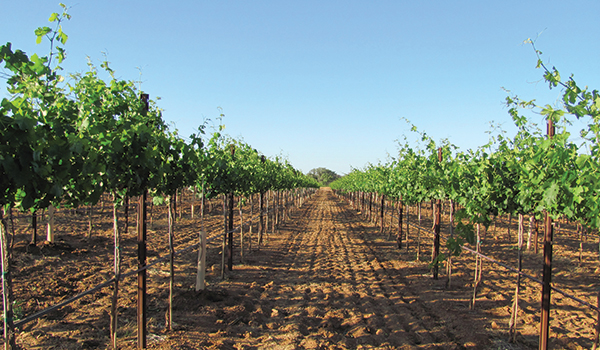 From an economic standpoint, Arizona’s wine industry is doing really well, according to Peggy Fiandaca, president of the Arizona Wine Growers Association and owner and marketing director of Lawrence Dunham Vineyards. “It is growing; there are new acres of grapes in the ground and new wineries opening up. Between 2011 and 2012, we doubled the number of gallons of wine that were produced in Arizona, and it is only getting better.”

While there were only a handful or so of wineries in Arizona six or seven years ago, there are now around 78. Most of these are scattered throughout the state’s three major wine regions. “The oldest is in the southeastern part of the state in Sonoita and Elgin; this is where the heart of the state’s wine industry began,” Fiandaca says, adding that the area is the only one of the three federally designated as an American Viticultural Area. The majority of the state’s grapes come from two other regions: the greater Willcox area and the Verde Valley. All three regions have the high elevations that grapes require to grow well.

The history of Arizona’s wine industry actually began in the pre-Prohibition days, says Fiandaca. Back then, Arizona had more grapes in the ground than California. From Prohibition times until the 1980s, it was illegal to make wine in Arizona. In 1982, Arizona passed a series of laws that enabled and regulated the activities of a new class of liquor license, the Domestic Farm Winery. “Arizona’s law was modeled after other states, but in May 2005, the U.S. Supreme Court ruled against the State of Michigan on a direct-to-consumer shipping case that made many provisions of Arizona’s wine law unconstitutional,” Fiandaca says. The successful passage of SB1276, which was signed by the Governor in June 2006, brought Arizona’s wine laws in compliance with the Supreme Court’s ruling and re-ignited the wine industry.

For the Arizona wine industry to grow and succeed even further, three key things must happen. First, there must be better support in the form of funding. “We grow some of the finest wine in the country in Arizona, but every day we hear questions like ‘What? You make wine in Arizona?’” Fiandaca says, adding that to get more economic support, the industry must increase its focus on marketing. Recent news indicates that people are already beginning to take notice of Arizona wines. Two of the state’s wines have earned a rating of 90 points by Wine Spectator, a desired designation. These are the 2010 Page Springs Cellars’s Colibri Syrah Clone 174 and the Burning Tree Colibri Vineyard’s Syrah from 2010, both from Southern Arizona.

Next, there must be a greater emphasis on research that centers on preventing diseases and pests that can impact the crops of grapes. Bringing in supply-chain industries to support the state’s wine industry is also key to the success of the industry. Currently, Fiandaca notes, starting a winery means purchasing most of the products — and, in many cases, the grapes — from out of state. “We need to be able to grow our own grapes and produce our own wine. Right now, there are not enough Arizona grapes being grown to meet the demand, and, due to lack of capital or access to funding, many winemakers purchase grapes and contract the winemaking process due the incredible vineyard and winery start-up costs.”

To help the state’s wine industry grow, the University of Arizona and Yavapai College have teamed up to work on the Emerging Wine Industry Strategic Plan. Those who participated in the project looked at the wine regions in areas like California and the Pacific Northwest to study how they grew and what steps Arizona can take to enjoy similar success. Yavapai College is also in the process of building a Southwest Wine Center, which will teach students about growing grapes and producing wine.

Tom Schumacher, president of the Verde Valley Wine Consortium, says the state’s wine industry is having a positive impact on both local and state economies. Referring to “The Economic Contributions of Verde Valley Winemaking,” which was published in April 2011 by the University of Arizona and Yavapai County Cooperative Extension, Schumacher says the estimated direct economic impact of the Verde Valley wineries, vineyards and tasting rooms in 2009-2010 was $5.5 million. In addition, the report concluded that the total of all economic activity in Arizona related to Verde Valley wine is estimated to be almost $25 million.

As the wine industry grows, new businesses will open or relocate nearby to take advantage of the expanding market, says Schumacher, who is also involved with the Yavapai College Southwest Wine Center. “The wine industry will support businesses involving packaging, marketing, storing, selling and shipping wine, as well as those that provide the supplies and maintain the equipment for the businesses.”

Sam Pillsbury, a winemaker who lives in Phoenix, makes his Pillsbury Wine Company wine under custom crush contract (a common practice of paying a bonded winery other than one’s own to process grapes into wine) in both Camp Verde and Willcox. Pillsbury, who owns tasting rooms in Old Town Cottonwood and Willcox, says he is committed to using only grapes that are grown in the area around Willcox in Sulphur Springs. “We do not import grapes or juice. I began this operation specifically to make a 100-percent regional wine.”

Pillsbury released his first wines under his own label in 2007. His first vintage was 500 cases, which grew to 3,000 cases in 2011. Despite his increasing success, Pillsbury says money is always a challenge. “It takes a minimum of seven years to break even when you grow your own grapes, and I plant more each year. I am always scratching for funds.”

Robert Carlson, a partner in Carlson Creek Vineyard near Willcox with his parents Bob and Liz and brother and sister John and Katherine, says he and his family farm 125 acres, 40 of which are under vine and the rest of which is in various stages of development. In the past several years, they have been “magnificently busy,” routinely selling out of their wine. The Carlsons purchase about 15 percent of their grapes from neighboring vines in the Willcox area. The lack of Arizona fruit is the main issue Carlson and his family contend with, and vineyard development constrains the rest of their business growth. “In any other major wine region, there is a host of grape growers offering their fruit,” Carlson says. “Since our industry has grown so fast, the growers that existed have fallen behind the demand or have been outright acquired by wineries.”

Schumacher and Fiandaca predict the Arizona wine industry will continue to grow. Basing his prediction on what he feels is a conservative growth estimate of 10 percent per year, Schumacher estimates the total economic impact of the Verde Valley Wine Industry in 2015 will be more than $44 million. Fiandaca is equally optimistic. “Over the next 10 years, we are going to have a lot more grapes in the ground and a lot more wineries on board. I predict that over the course of the next decade, Arizona will have over 200 wineries, and will have double the number of acres of grapes we have now.”