Golf: A Swing and a Walk Is Good for Business

Golf impacts diverse sectors of the economy, and Arizona is one of the game’s top destinations 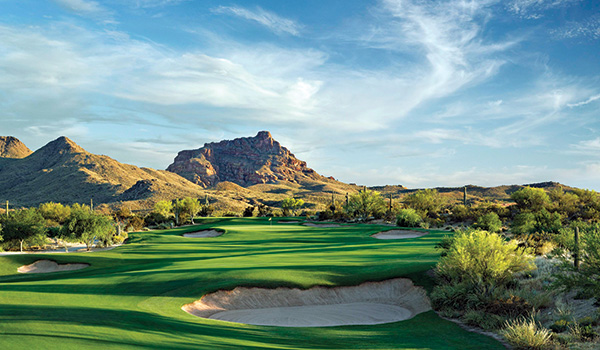 While the game of golf has a way of teaching humility, it equally has a way of pumping life into Arizona’s economy. According to Arizona Golf Industry’s Economic & Environmental Report released in 2006 — the last broad comprehensive report conducted on the golf industry in Arizona — the state’s golf industry has an economic impact in excess of $3.4 billion annually. This included revenue directly collected by Arizona golf courses, which amounted to more than $806 million. Of than amount, $396 million came from green and cart fees and $143 million from food and beverages sold. An additional $122 million was collected from membership fees, $17.8 million from driving range fees, and $252 million for businesses that supply the golf course industry. Revenue from additional tourism activities from out-of-state golfers was nearly $2 billion.

The annual Waste Management Phoenix Open draws around 500,000 people for the four-day event. According to economic impact studies by the Arizona Department of Commerce and the City of Scottsdale, the Waste Management Phoenix Open makes an annual contribution to the Valley economy of around $50 million. Statewide,  host organization Phoenix Thunderbirds reports, this past winter’s tourney brought an estimated $222 million — compared to 2007, the last time a study was conducted, this is a 23-percent increase in revenue on a 2-percent increase in attendance.

With both large manufacturers and numerous smaller side businesses, the game writer Mark Twain called “a good walk spoiled” is, for Arizona, a perfect and needed driver for its economic vitality.

Phoenix-based Karsten Manufacturing, the maker of PING drivers, putters and clubs, is one of the most recognized in the industry. Founded by Karsten Solheim, the only golf club manufacturer to be inducted into the World Golf Hall of Fame, the company employs 850 workers and exports golf clubs to more than 70 countries worldwide. While the private company does not release sales figures, in the U.S., Karsten is in the top three market share-wise in all the key equipment categories, which is comprised of drivers, fairway woods, hybrids, irons and putters. Karsten also enjoys a similar position in golf bags.

While the large companies have a definite effect on the state’s golf industry, money also flows from smaller companies and the services they provide.

“Golfers improve by my services and play more golf, which helps the economy,” says Robbie Camacho, a Phoenix-based PGA teaching professional and golf coach who has worked with more than 4,000 golfers since 1996. “Green fees increase, food and beverage purchases increase, golf product purchases increase, and, of course, state taxes benefit.”

One often-overlooked economic factor is real estate on golf courses. According to Arizona Golf Industry’s last Economic & Environmental Report in 2004, the overall economic impact also included additional residential housing premiums for those homes built in 2004 and located in a golf course community of $60,857,988. The premium attributable to all homes ever built in all golf course communities in Arizona was, at this pre-recession date, estimated to be more than $2,057 million.

“The value of a home located on a golf course lot is typically higher. However, many variances come into play when valuing a property,” says Kerri Callidora, director of relocation for Scottsdale-based Ventana Fine Properties. “Statistics show that [today] the average sales price of a golf course lot in Scottsdale is $1,390,135 versus an average of $1,319,579 for homes not on a golf course.”

Another great indicator of the positive influence of golf appears in the steady rise in golf memberships for a number of courses over the past two years, Callidora points out.

In July, Scottsdale, which in 2010 had nearly 30 percent of its 8.6 million visitors playing on the city’s more than 50 courses, hired Golf Channel personality Brandel Chamblee as the city’s “golf ambassador.” Chamblee, who played on the PGA TOUR for 18 years before joining the Golf Channel, will serve as a spokesperson for Scottsdale golf and represent the destination in a new advertising campaign targeted to avid golf travelers. Chamblee will blog posts for the new ILoveScottsdaleGolf.com website, make special appearances and communicate through social media. “Scottsdale is my home and that’s where I’m really focusing my efforts,” Chamblee says. “There are great golf courses and great things to do and see all over Arizona, but for golfers it really begins and ends with Scottsdale.”

Economic Mulligan
The recent severe economic downturn has, however, put the industry into a rough of its own. According to the National Golf Foundation, between 2008 and 2011 the industry lost nearly three million golfers. More than 300 courses nationwide have closed since 2005, with nearly half of that number going belly up last year.

Locally, the recession’s impact can be seen in the 52-year-old Moon Valley Country Club in Phoenix. Faced with mounting bills and withering membership numbers, Moon Valley’s owner filed for Chapter 11 protection in late July, claiming a debt of $6 million. The company planned to file a reorganization plan.

“We’ve been in business for 25 years, but it’s been brutal for the last few years,” says Brice Browning, owner of AZ Golf Works, a Tempe golf shop that specializes in golf equipment repairs and used clubs. “I know of golf shops that have closed and some gone bankrupt. We’ve survived by my reputation. We’re popular for our pre-owned clubs and the quality of our repairs.”

“Absolutely, the recession hurt our business,” says Brett Trenter, general manager of We-Ko-Pa Golf Club on the Fort McDowell Yavapai Nation. “I don’t know of a business that it didn’t hurt. We have been fortunate, however, and have been able to continue to make profits for the ownership in the poor times. We’re not where we were at prior to the recession, but we’ve had three years of continued growth and are cautiously optimistic about this upcoming season.”

Course GMs have had to get creative to attract more business. The Arizona Biltmore Golf and Wigwam Golf clubs date back to when Bobby Jones was winning Grand Slams and Gene Sarazen was inventing the sand wedge in his Florida garage (1930s). Over the last year the clubs began offering Hybrid Golf Outings, referred to as HgO. The alternative golf events condense the game for business teambuilding days and on-the-course business networking events for groups from 10 to nearly 300 people. Customized games include closest to the target and accurate drive contests.

Before the sluggish economy, We-Ko-Pa’s Cardholder program, which offered a number of course amenities, was only a summer pass. Now, the program is annual.

“We made the pass a tremendous value to those who had flexible schedules and who could wait to book their times,” Trenter says. “We also started incentivizing our guests to play 36 holes. We’ve seen increases in revenues and rounds.”

Recovery Shot
Golfers are familiar with the term “recovery shot.” After an errant swing puts them in a hazard, the recovery shot is an attempt to place the ball back in a favorable position. In many ways, the golf industry is doing the same after some very lean years. According to Bloomberg.com, golf in the U.S. is growing for the first time in five years, bolstering the sport’s $25 billion market. That revival of the game is being felt in Arizona.

“In my opinion we will still be going through a readjustment in the next couple of years,” Trenter says. “I believe that you’ll still see private courses struggle, many of which will need to adjust their thinking and let outside play in to provide cash flow, and a lot of the courses that have been barely getting by will go by the wayside. The courses that are healthy, however, will continue to try and give the existing golfing community value-driven experiences and will also try to drive new golfers through various programs.”

“Golf as a whole is showing a come-back, especially in tourism,” Camacho says. “Arizona is still major hub for a golf destination. Arizona ranks in the top 10 for best golf states in the U.S., according to Golf Digest magazine. I see golf growing strong in 2013.”