The Strength of ‘No Blame Game’ Leadership 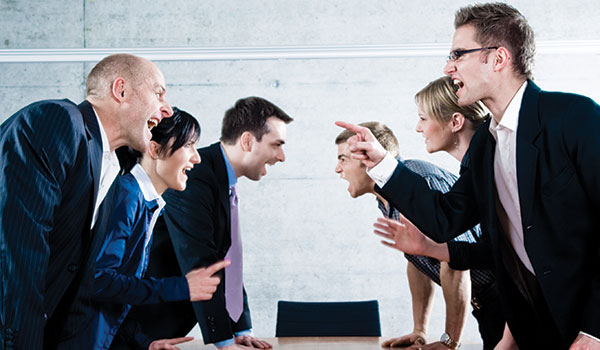 When you arrive at the office each morning, you find yourself in a blame-free zone. Your team attacks projects proactively and with confidence. When a problem arises, everyone involved “owns it” and takes corrective action. Bob in marketing says he’s personally responsible for an event flier going to the printer late and stays late to overnight them to the client. Meanwhile, Sally in accounting emails, “The client’s invoice was wrong because of our miscalculation. We’ve called and apologized.” And so it goes with every employee, in every department … and then you wake up.

Instead of facing the workday with excitement, most leaders want to crawl back under the covers from sheer dread of what actually awaits them at the office: excuse making, blame shifting and responsibility dodge ball. The underlying culprit is something they might not suspect: fear.

An organization that has perfected the blame game is one where hidden fear — fear of failure, of confrontation, of difficult tasks — runs rampant. And where do these kinds of energy-draining, counterproductive cultures originate? That’s right: with the leaders.

Blame-based leadership seeks to find a bad guy so that there is someone to absorb the problem, like a lightning rod absorbs a bolt of otherwise dangerous electricity. If a bad guy can be found, then everyone else can take a collective sigh of relief. And when it’s someone else’s problem, no one takes action to solve it. On the other hand, acknowledging that one is ultimately responsible for the results of one’s life, thoughts and actions creates a level of freedom not experienced by those who blame others — and it empowers that person to act.

Removing fear and establishing a take-responsibility culture begins with the leaders. But for the followers to adopt their leader’s fearless attitude, it’s imperative they understand their leaders are on their side and want them to win, as well as that nothing less than their highest degree of execution and performance will be acceptable.

Look at the person in the mirror. A leader can’t expect followers to change their attitudes while he stays mired in the old blame-based thinking. That’s why Step One in creating an excuse-free company culture is for the leader to take a good, hard look at his own tendency to blame others and at the underlying fear driving it. A few common culprits include fear of failure, fear of being underprepared, fear of confrontation, fear of risk, fear of being wrong and fear of being unpopular.

Once those fears have been identified, the leader needs to figure out which behaviors to change in order to set a better example. And if (actually, when) the leader screws up, he should set a good example and “own it.” Overall, the rewards of being a fearless leader will far outweigh the consequences.

Get real about how one’s organization handles mistakes. What happens when someone on a team screws up or takes a risk that doesn’t pay off? If the answer is that a leader swoops in to mete out swift and certain punishment to the offending employee, two things will happen: 1) The blame game will flourish (after all, no one wants to be the fall guy when something goes wrong) and 2) most people will shy away from taking any risks at all in the future.

Risk being part of the process for an organization to grow instead of stagnate, mistakes must be handled in a constructive way. Instead of using negative pressure, the leader should help people work through any kinks while keeping the focus on performance and growth. And acknowledge progress with full and complete focus on the success of what is right here, right now.

Preach the “choose or lose” gospel. It’s when employees feel powerless that they toe the company line, mindlessly follow orders or simply choose to do nothing. Leaders need to make employees understand they always have a choice. Big, small; to act, to not act — all choices matter. It’s important to make sure everyone in an organization considers the full range of options, even those that might seem impractical or illogical at first glance. After all, once a person realizes he has choices, it’s a lot harder for him to blame others for his actions, or lack thereof.

It’s not feasible to talk with every employee every day, but this attitude can be reiterated from time to time through, for example, an email to the entire organization that reads, “Ask yourself, ‘What’s the most important choice I’ll make at work today? What do I hope to achieve?’” Doing so will, in time, hardwire this type of careful consideration into the company’s culture.

Set crystal clear goals with deadlines. People like to know what’s expected of them; it’s the best remedy for fear. That’s why it’s critical to make sure everyone in the organization, including the owner or CEO, has specific, measurable, achievable, relevant and timed goals. It’s also beneficial for each person at a meeting, including the person in charge, to write down his or her individual goal and state them aloud. This helps remove all ambiguity and can make an amazing difference.

Get people thinking in terms of solutions, not problems. “If can’t wasn’t an option, what would you do?” “If you can’t blame Bob for not shipping the flier, what can you do?” and, “If ‘I was too busy to meet the deadline’ isn’t a valid excuse, what’s the solution?” are questions that encourage a solution focus. When everyone brings a solutions-oriented attitude to the table, the entire culture improves and everyone is driven by results.

Dissect outcomes in a “no excuses” moratorium. The purest kind of responsibility-based conversation includes clear expectations followed by excuse-less discussion of results. Questions that can help people (at all levels, including top management) learn to accept responsibility for their performance include “What did you do or not do that led to these results?” “If you could turn back the clock, what would you do more or less of?” and “Of the things you controlled, which do you think contributed to this success/failure?”

Partner up. Pairing people up in “accountability teams” that get together twice a month to talk about their goals and their progress can really increase the amount of responsibility everyone feels.

This idea started years ago when my brother Corey and I got together for dinner and began talking about our frustration with the lack of progress we were experiencing in our jobs. We started getting together for dinner once a week and simply asking each other questions about the goals we had set the previous week. The meetings were not designed to make us feel bad or to catch each other failing, but rather to get us to adopt mindsets of execution and performance.

The first few weeks, we saw some minor progress. Over time, our questioning skills sharpened and, with each passing week, the questions we asked were tougher. Consequently, our accomplishments became bigger and quicker-paced. Since then, I’ve encouraged the use of this partner system in many organizations, and it’s always a huge success.

The destructive thing about fear is that it keeps us from taking the quick, decisive actions courageous leadership requires — and the global economy demands. For a team to accomplish what they need to accomplish and learn to accept responsibility requires a leader who is courageous enough to ask — and ask often — big, clear, direct questions delivered in an I-want-you-to-win tone. Results will improve over time as employees get used to thinking about their own roles within the organization, and how their choices and attitudes impact the big picture.

Mike Staver — whose latest book, Leadership Isn’t for Cowards, explores other symptoms of hidden fear besides blaming — is CEO of professional development consulting company The Staver Group and a certified speaking professional, a designation held by fewer than 10 percent of professional speakers. His educational background — a bachelor’s in business and a master’s in psychology — has led to a focus on the vital importance of results and a deep understanding of the behaviors that lead to both self-sabotage and success.