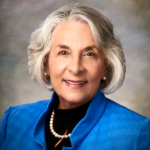 Hunt has served on several state and national commissions that are working to shape the future of healthcare and medical education. She is a founding member of the Health System Alliance of Arizona and serves as a board member for Creighton University Arizona Health Education Alliance. She is the co-chair of Greater Phoenix Leadership’s Affordable Housing and Homelessness Committee, and served as the chair of the Phoenix Forward Healthcare Leadership Council as well as a member of the Governor’s business leadership council, called Arizona Zanjeros. Additionally, she has served on the Governor’s Arizona Commerce Authority Board, Greater Phoenix Economic Council’s Healthcare Leadership Council, Council of Teaching Hospitals and Health Systems Administrative Board of the American Association of Medical Colleges, American Association of Medical Colleges Executive Council, Arizona Commission on Medical Education and Research, Arizona Bioscience Roadmap Steering Committee and Greater Phoenix Leadership Bioscience Task Force. Hunt has also represented Dignity Health in several community organizations, including Greater Phoenix Leadership and the Greater Phoenix Economic Council.

Hunt has received local and national recognition for her leadership in the healthcare field, including being named one of the Top 25 Women in Healthcare by Modern Healthcare magazine, a Top 25 Most Admired CEOs by the Phoenix Business Journal, and she was given the Transformational Leader award by the Arizona Chamber of Commerce and Industry. Among numerous other awards are Outstanding Business Leader of the Year from the YWCA, the inaugural Humanitarian Award from the Sage Foundation for Health, being named Bioscience Leader of the Year and being chosen a finalist for the prestigious Athena Award.