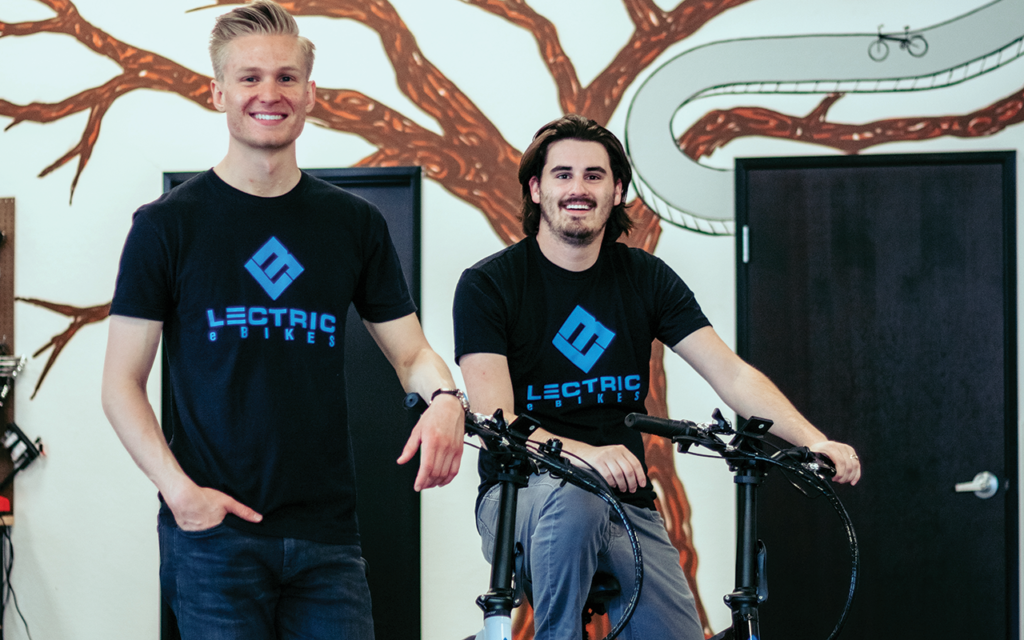 The company is expected to hit more than $13 million in sales by its first anniversary on May 30, 2020. With 90 percent of startups expected to fail, the duo’s seemingly overnight success has not come without a few hiccups along the way. Between career pivots, failed bike models and lack of capitol, the young founders have persevered with a customer-first business model.

When Conlow and Deziel went off to college, Conlow settled in Arizona, obtaining his bachelor’s and master’s degrees in business entrepreneurship and leadership, while Deziel stayed in their hometown of Minnesota, earning a Bachelor of Mechanical Engineering. The pair recognized that their unique set of skills positioned them to become great business partners. In 2018, the two were brainstorming business ideas to launch their first startup together. They soon recognized a market gap for high-quality e-bikes at an affordable price.

“Our first bike model was not a success,” Conlow says. “We didn’t request a sample first, which was a big mistake. We suddenly had 100-plus bikes on our hands that were not selling, and we were running out of money.”

The two started trying to sell the bikes on Craigslist and farmers markets at steeply reduced prices. Instead of giving up on their electric bike company dream, they decided to learn from their mistakes and took the time to design a new model with unbeatable product highlights, such as folding to less than half its size, arriving fully assembled, reaching up to 28 mph, all-terrain fat tires, a 25- to 50-mile range and an LCD computer display.

“We finally had the perfect bike, and all we needed was capitol to create the new sample,” Deziel says. “Luckily, Levi’s dad stepped in to invest in our company and ended up giving us another $10,000 to have 10 new models made.”

When the bikes arrived at the home garage they had been working out of, the pair took a huge risk in gifting all 10 bikes to influencers and bloggers who were heavy hitters in the electric bike world.

“We could have lost all of our money if the influencers and YouTube stars didn’t like our product, but we were so confident in what we had created,” Conlow says. “It ultimately paid off and resulted in the launch of our business.”

Once the reviews started rolling in from the influencers, the LectricXP bike started going on pre-order for months in advance. The company now has more than 150 video reviews and more than three million views on YouTube. Suddenly, Lectric eBikes had a new problem on its hands — being able to accommodate the influx of orders they were receiving.

Conlow and Deziel were then able to expand their business outside of a home garage and bought a warehouse in Phoenix to accommodate their large orders and growing staff. The company has a commitment to customer service and offers free shipping on all e-bikes to the lower 48 states, ability to contact the team seven days a week and sourcing parts from only the most trusted names in the industry.“From day one, we wanted to continue to push the limits,” Deziel says. “Whether it’s finding a way to reach higher top speeds or optimizing user friendliness, our customers’ needs drive our design process.”

Lectric eBikes’ team also worked to have their bike offered at an industry-shattering price without sacrificing quality or design.

“We don’t understand how other electric bike companies charge so much, and that’s a big part of why our customers believe in us,” Conlow says. “We truly believe that building a community of riders is more important than maximizing profits.”

“Building a community” is more than a business proposition. To give back to a community increasingly devastated by COVID-19, Lectric eBikes donated 8,000 KN95 masks to healthcare workers in Arizona.

A study from Deloitte predicted that between 2020 and 2023, there will be 130 million electric bikes sold around the world. Amid concerns about public transportation becoming a hotspot for contracting coronavirus and changes in how the public gets around, Lectric eBikes reports at end-of-April press time that it has seen a 140-percent increase in sales since the week of March 15.