Go to Bat for Innovation-Nurturing Approach to Business 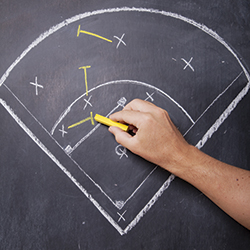 In baseball, you can fail 70 percent of the time and still be considered a strong player. Why is it that businesses give an employee with a new idea just one chance? Pitchers lose games, batters strike out, fielders make errors. Instead of firing them or sending them back to the minor leagues, managers study what went wrong. CEOs need to do the same thing. Kill the project, not the person. Instead of telling Bob, “You’re done,” they should tell Bob, “The project’s dead. What do you want to do next?”

To succeed today, businesses absolutely must be innovative, and they can’t be if they’re unwilling to have some failures. Too many companies punish failure and fail to adequately reward success. How does that motivate the employees with great new ideas?

In this World Series season, here are a few other baseball analogies that will help any business score on innovation:

Innovation is about responding to needs instead of trying to dictate them. Companies need to listen to their customer service complaints — what are customers saying that can help them improve their product or process? And they need to talk about the crazy ideas — including those that seem too simple to succeed. Proctor & Gamble made diapers and cleaning products; someone suggested putting a diaper on a mop handle, and voila! The Swiffer!

Terry Jones, author of On Innovation, founded Travelocity.com in 1996 and led the company as president and CEO until May 2002. He is managing principal of Essential Ideas, a consultancy he co-founded to help companies in their transition to the digital economy, and serves as chairman of the board at Kayak.com, which he also founded.